Lady Gaga has opened up about her eating disorder-ridden past. The megastar spent a period during her youth making herself sick while dreaming of a “skinny little ballerina” body. 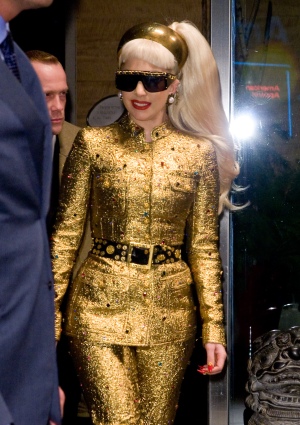 Ask Lady Gaga a straight question and you’ll get a straight answer — or at least that’s how one fan’s experience went at the recent It’s Our Turn conference in Los Angeles.

“I used to throw up all the time in high school,” Lady Gaga replied to a young woman in the audience who inquired how the singer deals with body-image issues. “So I’m not that confident.”

Elaborating on her bulimic past, the “Born This Way” singer continued, “I wanted to be a skinny little ballerina but I was a voluptuous little Italian girl whose dad had meatballs on the table every night. I used to come home and say, ‘Dad, why do you always give us this food? I need to be thin.’ And he’d say, ‘Eat your spaghetti.’ “

Where did Lady Gaga get her stage name? >>

Lady Gaga admitted that the eating disorder threatened her ability to perform, which was ultimately what led her to stop purging. The 25-year-old explained, “It made my voice bad, so I had to stop. The acid on your vocal chords — it’s very bad.”

Lady Gaga went on to say she still has concerns about her weight and body image, but urged the woman in the audience to seek help for herself. “It’s really hard, but you’ve got to talk to somebody about it.”

“Weight is still a struggle,” the singing idol went on to say, revealing show-biz secrets. “Every video I’m in, every magazine cover, they stretch you — they make you perfect. It’s not real life. I’m gonna say this about girls: The dieting wars have got to stop. Everyone just knock it off. Because at the end of the day, it’s affecting kids your age. And it’s making girls sick.”