JCPenney isn’t changing their minds about having Ellen DeGeneres as their spokesperson despite strong criticism. See what a JCPenney CEO had to say of the situation Thursday. 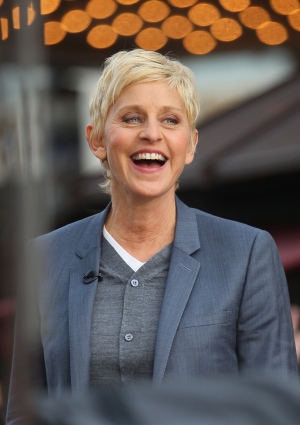 Neither JCPenny nor Ellen DeGeneres are going to let a group called One Million Moms boss them around. The retail outlet and comedienne are happily paired up, and according to CEO Ron Johnson, they plan to stay that way.

Appearing on CBS This Morning on Thursday, Johnson said of the JCPenney/Ellen DeGeneres situation with One Million Moms, “We don’t look at it like a controversy. One of the great things about America is people can speak their mind. And you know, the organization that believes one thing has spoken and it was great to see Ellen share her views yesterday.”

Elaborating on JCPenney’s decision to keep Ellen DeGeneres as a face of the company he continued, “And we stand squarely behind Ellen as our spokesperson and that’s a great thing. Because she shares the same values that we do in our company.”

Bill O’Reilly has Ellen DeGeneres’ back in “witch-hunt” >>

“Our company was founded 110 years ago on The Golden Rule, which is about treating people fair and square, just like you would like to be treated yourself. And we think Ellen represents the values of our company and the values that we share.”

Do you applaud JCPenney’s decision to stick with Ellen DeGeneres?