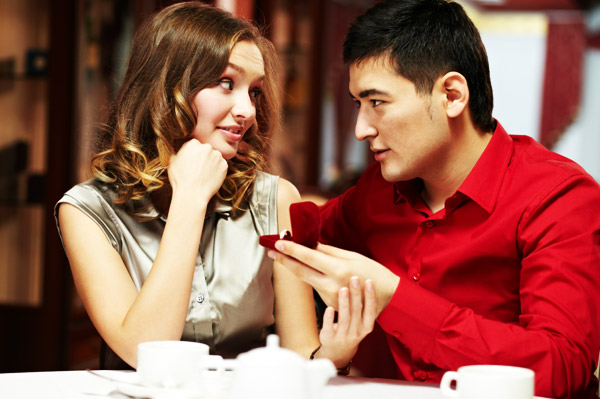 Your wedding proposal is supposed to be a once-in-a-lifetime, magical experience that your grandchildren tell your great-grandchildren about. Sadly, for every beautiful, romantic proposal, there are at least five or six epic fails.

We want to save you the heartbreak that inevitably comes from a public proposal. Watch these five cringeworthy proposals and consider a more intimate proposal when the time comes. Call it our Valentine’s Day present to you.

One man thought it would be super romantic to propose to his girlfriend on Ellen DeGeneres’ daytime talk show over the holidays.

“I would love to surprise her on your show by asking her to spend the rest of her life with me,” Jacob wrote in a letter to Ellen. The camera panned to his girlfriend, noticeably surprised.

“I have been waiting for this moment my whole life,” Jacob said on one knee. “I love you to death. I want you to marry me.”

Oh, burn! Ellen fans wondered whether or not this was the real thing or a hoax. Does it matter? We feel for this dude!

This lovesick dude planned a romantic proposal… during halftime of a basketball game. The announcer and everyone was into it. Too bad she said no in front of a packed house. Burn!

Scorned by a scoreboard

You’ll notice a theme with these proposals: Many of them happen at sporting events. We can see why guys would think that this is a super-romantic idea. Note to dudes everywhere: It’s not. Case in point? This scoreboard proposal during a Valentine’s Day New York Rangers game that went tragically wrong. His rejection was even posted on the huge Jumbotron, so we feel for the guy.

Heartbreak in front of millions

What better way to get rejected than front of millions of people, right? This poor dude thought proposing on television would spell R-O-M-A-N-C-E. Too bad her rejection was loud and clear… ouch!

Who doesn’t love soccer, right? This girl. Her man got down on bended knee to give her the surprise of her life. She was surprised, but not in a good way. See how this poor dude is humiliated in front of a packed stadium. We can only hope someone bought him a pint of Guinness after this.

Which proposal was the most cringeworthy?