Lady Gaga announced her 2012-2013 tour details with a gothic poster and a series of exuberant postings to Twitter this week. 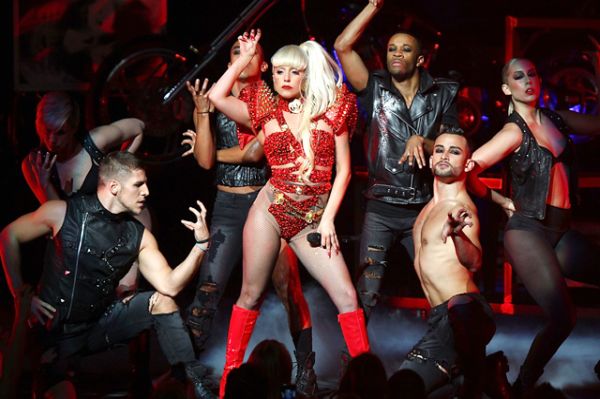 The Material Girl isn’t the only pop star who knows how to take her show on the road! On Wednesday, Lady Gaga unveiled the first 11 dates and locations on the itinerary for her upcoming world tour.

That’s right, Little Monsters: Gaga’s coming to town. The 25-year-old singer has announced that she’ll be jet-setting around the globe on a new world tour beginning this spring.

She’s expected to perform more than 100 shows in 2012, following on the success of her smash hit disc, Born This Way. Tickets for the globetrotting stage show, which Gaga has dubbed the Born This Way Ball, will go on sale in just a couple of days.

The “Alejandro” singer will kick off her 110-date Born This Way Ball tour in South Korea on April 27. Gaga will eventually move on Hong Kong, Japan, Singapore and New Zealand before playing dates in six Australian cities, including Brisbane, Sydney, Melbourne and Perth.

“I’m so excited. The Haus has been working so hard, we can’t wait for you to see it!!” she wrote in the tease to the reveal. “Love you Little Monsters, have the time of your life.”

Gaga unveiled the official artwork for the stage spectacular earlier this week. The gothic image shows the chart-topper with heavy eye make-up and the prosthetic cheek spikes she took to wearing around the release of last year’s hit single “Born This Way.” A close-up shot of Gaga’s face reveals a castle where the star is dressed in a keyboard dress.

The artwork was released a day after Gaga showed off the set design for the Born This Way Ball, which is eventually expected to invade 450 venues over the course of two years. The Ball will be taking place in an elaborately designed gothic castle that includes intricate details like viewing towers, cross-like carvings and a catwalk that extends into the audience.

The design is distinctly different than the Monster Ball Tour, which was set in modern-day New York City, complete with a subway car, lighted marquees and, you guessed it, a giant monster that Gaga and her team of backup dancers had to defeat in order to attend the coveted Monster’s Ball.