Some critics say CNN political analyst Roland Martin’s tweets during the Super Bowl advocated violence against gays. And that’s precisely why he’s out of a job — at least temporarily. 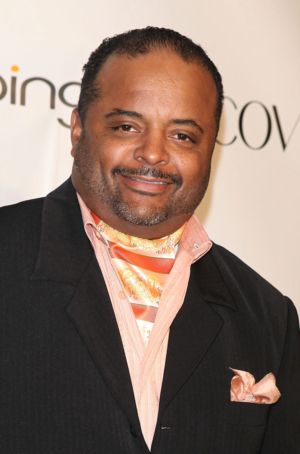 CNN on-air personality Roland Martin is in a heap of hot water — and facing a frog march to the unemployment line — over a series of controversial Super Bowl Sunday tweets that some critics are calling homophobic.

On Wednesday, CNN announced that it is suspending Martin in the wake of the pundit’s remarks about a Super Bowl ad spot touting the release of David Beckham’s H&M underwear line.

“If a dude at your Super Bowl party is hyped about David Beckham’s H&M underwear ad, smack the ish out of him! #superbowl,'” Martin tweeted to his almost 95,000 followers shortly after the tighty whitey-wearing soccer player’s spot for the retailer aired.

Earlier in the day, Martin made fun of New England Patriots outside linebacker Brandon Spikes for wearing his pink “lucky suit” ahead of the big game.

“Who the hell was that New England Patriot that just showed in a head to toe pink suit? Oh, he needs a visit from #teamwhipdatass,” he cracked on his Facebook fan page.

The Gay and Lesbian Alliance Against Defamation (GLAAD) argued that the postings advocated violence against members of the LGBTQ community. The group also pointed out that Martin openly supports “conversion therapy” for gay people.

“My wife, an ordained Baptist minister for 20 years, has counseled many men and women to walk away from the gay lifestyle and to live a chaste life,” he wrote on his website in 2006.

GLAAD responded to the Beckham tweet with one of its own.

“@rolandsmartin Advocates of gay bashing have no place at @CNN #SuperBowl #LGBT.”

An incensed Roland fired back, writing, “@glaad @CNN well you’re clearly out of touch and clueless with what I tweeted. Way to assume, but you’re way off base.”

Martin denied his online ramblings were homophobic, but acknowledged that they were intended to be “over the top.”

The explanation has done little to save his job. CNN released the following statement, explaining its decision to sideline the journalist indefinitely.

“Roland Martin’s tweets were regrettable and offensive. Language that demeans is inconsistent with the values and culture of our organization and is not tolerated. We have been giving careful consideration to this matter and Roland will not be appearing on our air for the time being.”

GLAAD rejoiced as news of Martin’s suspension spread around the blogosphere.

“Yesterday, Martin also spoke out against anti-LGBT violence. We look forward to hearing from CNN and Roland Martin to discuss how we can work together as allies and achieve our common goal of reducing such violence as well as the language that contributes to it.”