Taylor Armstrong says she was brutalized at the hands of her late husband. Others say she is making the whole thing up to sell books. Who’s telling the truth? 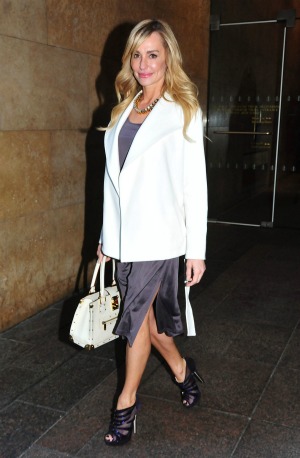 Taylor Armstrong lived through horrifying abuse at the hands of her late husband — or did she? Some close to the reality star say she’s making it all up to cash in big with her new book. What’s the truth?

One major discrepancy is revealed in the stories Taylor has told about the night Russell allegedly nearly knocked her eye out after punching her in the face. She said it happened when they “got home” after her 40th birthday party, but she later said it happened at a hotel room at the Four Seasons. A review of her Twitter timeline shows a happy-go-lucky message the next day.

“Now we’re pool side at the 4 seasons and i am thinking of never leaving … i had the BEST birthday party ever! thank you Russell and all my crazy pals who joined in on the mayhem.”

Why would she sit by the pool with a black eye? She says she didn’t have one, telling The Daily Beast the picture circulating of her bruised and battered is from several weeks later after surgery to repair the damage and that Russell forced her to send the message.

Still, 25 days passed between the night Taylor alleges the assault took place and the day she says she had surgery to fix the damage — and she showed no physical evidence of injury.

There are also discrepancies over her story that Russell dislocated or broke her jaw.

Some of Taylor’s cast mates on The Real Housewives of Beverly Hills have also expressed doubts that Taylor is telling the true story of what passed between the couple — in fact, there was an entire episode about it.

Taylor also has a history of allegedly scamming people, and has gone through four name changes in the process, including using the surname Ford to imply she was a member of the automotive company family.

“She’s from Oklahoma, for goodness sakes!” Russell’s longtime business associate Tom Crosswaite told the Daily Beast. “And she’s changed her name from Shana Hughes to Shanna Taylor to Taylor Ford to Taylor Armstrong. She wants you to think she’s a dumb blonde but she’s not!”

Both Taylor and Russell were implicated in multiple lawsuits alleging business fraud at the time he killed himself.

Another person who thinks Taylor is making up the abuse allegations to cash in? Russell’s own sister.

“If she was really abused then I’m sorry,” Taylor’s sister-in-law Laurie Armstrong-Kelsoe told The Daily Beast. “But there is not one police report, not one 911 call on record. And this is from a woman who brags that she worked for years with an abused women’s shelter! There is nothing that really supports her allegations.”

“It is not fair and not right,” she says. “Shame on her for using this kind of pathetic grab for money by smearing a dead man’s name. It’s the utmost worst thing she could have done for the sake of the children.”

Tell us: Is Taylor Armstrong lying about being abused?

43 mins ago
by Hanna McNeila