Gisele Bündchen certainly had some not-so-nice stuff to say about her hubby’s teammates after their Super Bowl loss. Does she have the right to voice her opinion or should she “stay cute and shut up?” 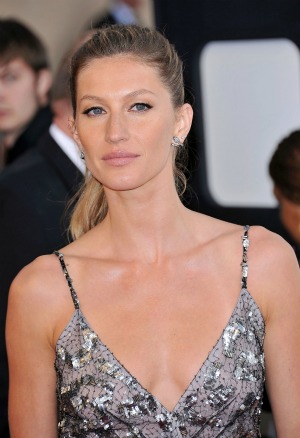 Gisele Bündchen certainly had something to say about her husband Tom Brady‘s teammates and their perceived lack of work ethic after the Patriots’ loss to the Giants at the Super Bowl last weekend. Agree or disagree, but did she have a right to defend her hubby?

At least one player says no — but it sure sounds like he’s telling women we should just be pretty and silent and leave the sports talk to the menfolk.

Giants running back Brandon Jacobs told the press at Monday’s championship rally, “She just needs to continue to stay cute and shut up.”

But not everyone agrees.

“I mean, she’s supposed to stay out of things like that,” Giants defensive end Osi Umenyiora said, according to the New York Post. “But at the end of the day, that’s their relationship and she has the right to say whatever she wants to.”

Admittedly, Gisele’s outburst was incredibly harsh. When confronted by a heckler immediately after the game who yelled that Eli Manning owned her husband, she snapped back, “My husband can’t f***ing throw and catch the ball at the same time. I can’t believe they dropped the ball so many times.”

While the Patriots players have themselves remained mum on her outburst, one of the wives (who chose to remain nameless) told the Chicago Sun-Times that she isn’t surprised.

“Gisele has very few friends among the wives,” she said. “Of course, many are jealous of her looks and all that, but she doesn’t make it easy to like her, since she obviously feels so superior to all of us.”