Courteney Cox and David Arquette have been separated for over a year and a half — but does the Cougar Town actress still carry a torch for her ex? Sure sounds like it to us. 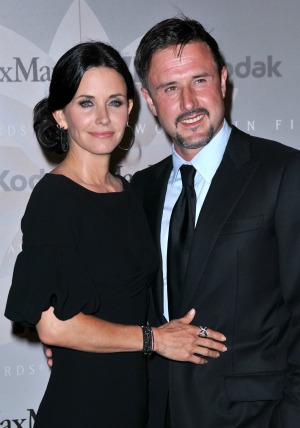 Is Courteney Cox still hung up on David Arquette? Despite reportedly being the one to initiate their split, it sounds like the Cougar Town star still carries a torch for her ex.

Cox called into the Howard Stern Show on Sirius today and revealed what sounds like a brightly burning torch still carried for her still-husband (the couple has yet to formally divorce).

No reunion for Cox & Arquette >>

“The truth of the matter is that we love each other so much. We have such affection for each other, but we are very different,” she told Stern.

“I’m really not ready [to date],” she said. “I’m still emotionally… it’s hard. I was in a marriage for a very long time and just because we ended up growing apart for reasons of… we just led separate lives and we have different compatibility issues, I’m just not there.”

When Stern flat-out asked her if she wanted to get back together with Arquette, she hemmed and hawed and certainly made it sound like the answer she wanted to give was not the polite thing to say and she was holding back.

“Um, this is awkward, because I actually probably feel like his girlfriend’s listening, besides the millions of other people,” Cox said after a pregnant pause. “There is a huge part of me that… there’s a huge part of my life with David, no question, but I feel like right now our relationship is probably better than it would be if we lived together, it’s definitely better than it used to be. We communicate better, we have much more respect for each other, we listen. It’s hard.”

Catch Courtney Cox on the season premiere of Cougar Town Feb. 14 on ABC.