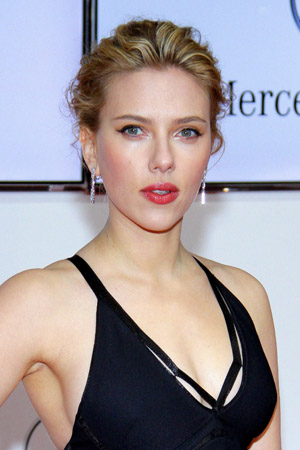 I think we all now know the reason why Scarlett Johansson and Ryan Reynolds ended their marriage: Sweaters. We mean, it’s the only thing that could have broken up the marriage, based on Johansson’s hatred of the warm winter wardrobe staple.

“Oh gosh, so sad,” the actress told US Weekly of GOP candidate Rick Santorum’s love of sweater vests. The actress co-hosted an event Tuesday night in honor of President Obama’s reelection campaign. “My dad wore them, and, I mean, they’re charming for family photos I guess, and dinner with the grandparents. I think there’s an ironic way to wear a sweater vest, but other than that I’m not sure!”

Okay, so we’re pretty sure we’ve never seen Reynolds in a sweater vest. Come to think of it, Obama isn’t hip on sweaters, either.

The We Bought a Zoo actress did get serious when it came to the 2012 presidential campaign, though.

“There is so much at stake in this campaign,” Johansson said. “2012 will not be easy. We have to fight even harder this time around, and that’s where Runway to Win will make a real difference.”

Runway to Win features clothes and accessories created by high-end designers with all the proceeds going into Obama’s campaign coffers.

Johansson shouldn’t expect her Zoo co-star Matt Damon to help with the campaign, though. The politically-minded Oscar winner has been critical of Obama’s first term.

“I’ve talked to a lot of people who worked for Obama at the grassroots level. One of them said to me, ‘Never again. I will never be fooled again by a politician,'” Damon told Elle in 2011.

“You know, a one-term president with some (nerve) who actually got stuff done would have been, in the long run of the country, much better.”