Connor Cruise is in hot water over a homophobic tweet he sent to his now-ex rep. Find out why the celebrity kid’s Super Bowl disappointment has landed him on the naughty list today. 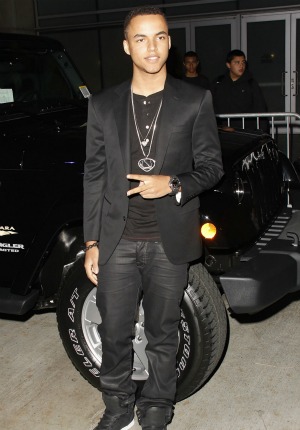 Do tweets have asses? If so, can they be gay? Connor Cruise may have just revealed an entire subculture of Twitter sexuality — or he could just be a homophobe.

Like many teens, the son of Tom Cruise and Nicole Kidman throws around the word “gay” as an unfortunate choice of casual insult. Unlike many teens, Connor Cruise is on the world stage because of his superstar parents, and now his insult is getting him pegged as a homophobe.

The teen — who despite his Los Angeles upbringing is a die-hard New England Patriots fan — let his emotions get the best of him after the team’s crushing loss at the Super Bowl on Sunday. When one of his reps teased him about the results, the kid flipped out.

Connor responded with typical teen vitriol. “That was a gay ass f**king tweet… U don’t say s**t like that about my team the second they lose. Low.”

Krim, who heads up the charitable organization Give Back Hollywood and helped book gigs for burgeoning DJ Connor, responded that he was just joking, but the kid was not having it.

Krim said he immediately ended his professional relationship with Connor and emailed a screen grab of the entire exchange to pretty much all of his colleagues, hoping to get him blackballed, which isn’t very adult but whatever.

Calling Connor’s words “highly offensive and what I consider homophobic,” Krim wrote in the email, “I am no longer working with Connor Cruise. In fact, I am no longer speaking with [him]… I refuse to be professionally (or even personally) associated with someone that engages in this sort of behavior… I just thought you should know who and what you’re dealing with.”

The rep also told the New York Post‘s “Page Six,” “I did a lot for [Connor], and he was less than respectful and appreciative… I made a joke, and let’s just say his reaction was not what I expected. It’s disappointing when you think someone is one way and they turn out to be another.”

So what does the kid have to say for himself? “What I texted was unacceptable,” he told “Page Six” through a different rep. “It is not a reflection of who I am and what I feel, and it certainly won’t happen again.”

He might want to chat with his dad and close family friend John Travolta before dissing gays. No reason. Just seems like a good idea.