Russell Brand has not requested financial support in his divorce from singer Katy Perry — this despite a California law entitling the funnyman to at least $20 million of the singer’s fortune. 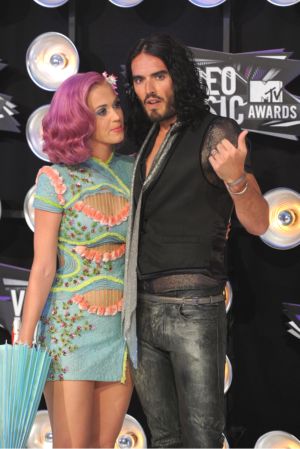 Russell Brand will walk away from his 14-month marriage to Katy Perry with the money he brought into it.

And not a penny more.

The shaggy-haired comic and sometimes actor filed the final divorce papers to legally dissolve his union to the pop tart on Tuesday. The marriage will officially be over on June 30 — after the required six-month waiting period.

And Russ is hitting the road without carting any “Katy Bucks” in tow.

The couple — who married in an Indian ceremony in October 2010 — never got around to signing a prenuptial agreement. Failure to do so entitled Brand to half of the 27-year-old brunette babe’s millions under California’s community property law — a clause that demands a 50/50 split of marital assets in cases of divorce where there is not a prenup already in place.

Forbes estimates that Perry earned approximately $44 million between May 2010 and May 2011. Based on that projection, the Arthur star could have petitioned the court for at least $20 million (earlier reports suggested $30 million) from his estranged bride.

Nevertheless, Brand — worth a reported $15 million — is not asking for any of Katy’s cash, well-placed informants told TMZ Wednesday.

And for now, gossip gawkers will have to rely on the word of such insiders: Perry reportedly “isn’t ready” to talk about her ex. The “Firework” singer asked that reporters be removed from the red carpet press line at Saturday’s ESPN Pre-Game Super Bowl Party in a bid to avoid questions about her high-profile split.

The prenup Katy Perry should have had >>

“Katy isn’t ready to talk about what happened with Russell,” a source blabbed to The Huffington Post. “She wanted to focus on putting on a great show at the hottest party of the weekend and enjoy hanging out with her friends. She knew that if she let media ask questions, they would ask her about Russell and she just didn’t want to go there.”