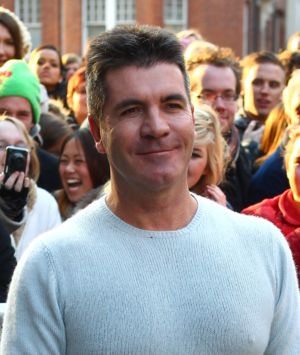 American Idol vs. The Voice vs. The X Factor: Call it the too-many-singing-shows-not-enough-singers dilemma.

Simon Cowell believes his signature braggadocio doomed The X Factor USA to ratings failure. Oh — and while we’re being honest, the acerbic talent show pundit is also dishing the deets on his feelings about another buzzworthy TV talent show, NBC’s The Voice.

Though not enough to catch up to the 20 million-plus fans who tune into American Idol weekly, The Voice rated substantially higher than the X Factor’s premiere, which drew 12.5 million when it debuted on Sept. 21.

But if you ask Cowell, The Voice hasn’t got the chops to put X Factor at a disadvantage.

“I would ask… how many hit records have they made? How many artists have they discovered?” the music mogul remarked in an interview with Extra TV on Tuesday. “It’s only because I opened my big mouth and said we were going to get 20 million [viewers]. If I hadn’t said that, everybody would be saying the show was a huge success.”

The Voice is home to panelists Cee Lo Green, Christina Aguilera, Blake Shelton and Adam Levine — multiplatinum-selling recording artists in their own rights. Cowell, however, believes spending money to seat big stars on singing competitions is not worth it in the long run.

“When we first launched [Pop] Idol in the U.K. years ago, we didn’t think for one second there had to be an A-list star on the panel. Everyone on the panel was really unknown. Firstly, they are incredibly expensive — that is millions you lose on something else,” he explained.

Nigel Lythgoe on The Voice: I think they need stronger talent >>

But Simon’s remarks come a week after a stunning cast sweep saw Welsh host Steve Jones and judges Nicole Scherzinger and Paula Abdul all axed from The X Factor. Only L.A. Reid is guaranteed a place on the judging panel next season.

Cowell found out about the changes at the “beginning of the year.”

“I would’ve liked to have kept her. She was very gracious and I said that to her. She understands it’s business. It’s never personal.”