Justin Bieber fans have been known to threaten, bully and stampede anyone who gets a little too close to their banged messiah, but some Miami Beliebers got a hearty dose of their own medicine when they came face-to-face with one very crotchety property owner over the weekend. 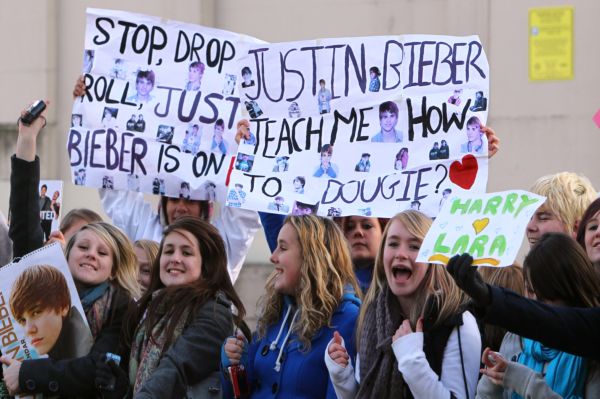 It seems Bieber Fever has become a bit too overwhelming for one gentleman of a certain age. The elderly owner of a popular Miami recording studio has become a viral sensation after he demanded police arrest a group of screeching Justin Bieber fans loitering outside his property!

The Biebs has had a busy week working with not one, but three living rap legends: Pharrell Williams, Timbaland and Lil Wayne. The hip-hop aficionados are helping him prepare for his upcoming album Believe, which will also feature collaborations with Kanye West and Drake.

After learning of Biebs’ scheduled jam sessions, a group of young Bieber fans camped outside the city’s famous Hit Factory recording studio, waiting for a sighting of their idol. The makeshift vigil had been going on for nearly a week when the building’s enraged owner called the police on the prepubescent girls Sunday night.

The disgruntled senior citizen had had enough of Justin’s obsessed followers causing a ruckus on site, prompting him to call in the paddy wagon on the teen screamers.

Lock ’em all up, he demanded in a huff.

In a hilarious overreaction you’ll have to see to believe, the annoyed older man told the police, “I want them arrested!”

The Hit Factory owner also claimed that the young squatters caused “$10,000” in damages to his property during their four-night stakeout.

Once it became clear that the officers had no intention of arresting the little Biebettes, the owner walked away to a chorus of giggles.

Pleading their case to the police, the girls explained, “[Justin is] amazing! He’s everything!”

“I touched his hand! He smells like cotton candy!” another exclaimed.

Gatherings of Bieber fanatics have been known to end with someone going to the hospital. In October 2009, Justin’s manager, Scooter Braun, was arrested and slapped with a criminal charge of inciting a riot after a Bieber album signing turned into a riot at a mall in Long Island, New York. The following spring, Justin’s mother, Pattie, narrowly escaped injury when she was knocked over by a group of sprinting teenage girls clamoring for a piece of her famous son.

Ah — how could we forget Christmas 2010? That’s when a day of post-holiday shopping by The Biebs caused all kinds of holy hell at a mall in his native Canada.