M.I.A.’s shocking Super Bowl bird may not have been so meaninglessly spur-of-the-moment after all. Could it have been meant for one person in particular? 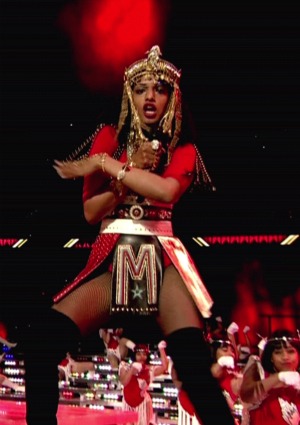 Peeps in rapper M.I.A.‘s camp are saying that when she flipped the bird at the Super Bowl last weekend it was just a case of “nerves” — but it’s possible the gesture could have been meant for a very specific person.

M.I.A. has reportedly split from her extremely wealthy fiancé Benjamin Bronfman, heir to the Seagrams fortune and former CEO and Chairman of Warner Music Group.

Insiders told the New York Daily News that M.I.A. is spending most of her time in London while Bronfman, who now works as an environmentalist despite his $2.5 billion fortune, stays behind in New York City with the couple’s 3-year-old son Ikhyd.

M.I.A. appears to be giving the finger to both the men in her life, including the little one, with one source saying she “sometimes goes six weeks without seeing” the tot.

Could the finger — and M.I.A.’s slip-up of saying “s**t” in the song instead of replacing the lyric with something more family-friendly as rehearsed — be a subconscious message to her probably former-fiancé and son? It seems a perfect metaphor for the way she has allegedly cut them out of her life.

By the way, M.I.A. has yet to apologize for the move herself. She hasn’t even updated her Twitter account since right before the big game, but a source close to the performer attributed the moves to “adrenaline and nerves,” telling ABC News Radio that she simply got “caught up in the moment” and that the two gestures — the finger and swear — “weren’t an attempt to make any kind of statement.”

Either way, the NFL isn’t buying it.

“The obscene gesture in the performance was completely inappropriate, very disappointing, and we apologize to our fans,” said league spokesman Brian McCarthy.