George Clooney is a notorious practical joker, but many of his best pranks have remained top secret — until now. Read on to find out how he has tricked his co-stars and why they still consider him a friend anyway. 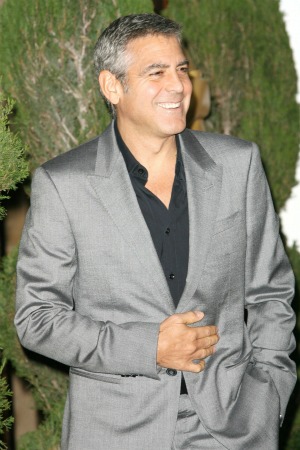 Former ER costar Julianna Margulies revealed an early George Clooney joke. She told the LA Times Magazine about a co-star early in the show’s run who thought he could make a fool out of the actor. She said one day at lunch, “He asked George, ‘Does my pasta smell funny?’ and then pushed the plate into his face.” Instead of punching the dude, “he waited until the guy’s last day and placed a license plate frame on his car that said, ‘Honk if you like p***y.’ The guy thought everyone was honking and waving goodbye to him.”

Ocean’s Eleven producer and longtime pal Jerry Weintraub told the LA Times Magazine about one prank that almost went too far. “I had a gold silk shirt — a very expensive gold silk shirt — Clooney hated,” Weintraub said. “Once at the Bellagio when we were doing Ocean’s, I was having drinks with the guys, and Clooney sneaked into my closet and stole the shirt. That September, for my birthday, I received a big box wrapped with ribbon — and in it was my gold shirt. On the back, Clooney had drawn a picture in black marker of a giant penis, and he’d had everyone who participated in a charity golf tournament for prostate cancer in Las Vegas sign it, too. There were 30 signatures — Brad Pitt, Matt Damon, Don Cheadle, Wayne Gretzky…”

“So I opened the box,” he recounted, “jumped in my golf cart and drove over to his office — this was when we both had offices at Warner Bros. Clooney was on the phone to [director Steven] Soderbergh, and there were people in his office. I walked in, took a golf club and broke up the place — smashing lamps, throwing a bicycle through the window, tossing scripts around. Clooney was curled up on the floor, screaming to Soderbergh, ‘He’s gone nuts, he’s gonna kill us all.’ Now, I was just kidding, and Clooney knew it. But then the head of the club came off and flew across the room, just missing him. We looked at each other and figured it had gone far enough.”

When Clooney divorced Talia Balsam he moved in with a cat-loving pal. Trying to be a good roommate, Clooney began scooping out the litter box — but his friend had no idea he was doing it and thought the cat just stopped pooping. After a visit to the vet the cat was put on meds to help clear his pipes. After a few days Clooney took a duce in the litter box and waited for his friend’s astonished — and horrified — reaction.

So why doesn’t everyone in Hollywood hate George Clooney — or at least avoid being put in the path of his mischievous ways? Because his pranks are good-natured and not hurtful. “Humor only gets me in trouble when I forget that any joke I make will be heard by a lot of people and can be hurtful to someone if I’m not careful,” he told the LA Times Magazine. “I’m just screwing around… but you realize as you get home that it’s something that would hurt someone’s feelings, and maybe it’s not needed. You have to consider that a little more.”

Read more on George Clooney practical jokes over at the LA Times Magazine.