We got a whole eyeful of David Beckham during Sunday’s Super Bowl commercials. Find out why his kids were less-than-enthused to see the ad. 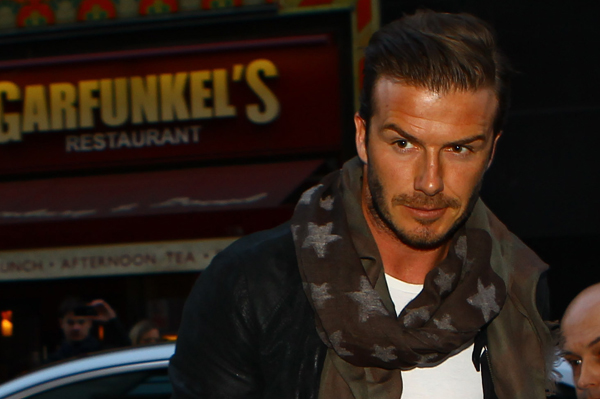 David Beckham was a sight for millions of sore female eyes during Super Bowl XLVI in his H&M underwear commercial. However, there were at least three people who weren’t pumped to see Becks in his drawers: His three sons.

“The kids loved it, but they were also embarrassed as well because there was [sic] other people in the room,” Beckham told Ryan Seacrest on his radio show Monday morning.

The L.A. Galaxy player also admitted that he was anxious about seeing it on television, too.

“I’m very shy. Yesterday, when we were watching the Super Bowl in a room of about 20 people, it came on and I actually didn’t know where to look. It was kind of embarrassing,” he joked to Seacrest.

He’s not nervous about discussing his underoos, though.

“It has to fit right, it has to look right, because whoever’s gonna see it is gonna want to look at something nice. Comfort’s very important,” Beckham told Seacrest of his preferences.

“Briefs are what I mostly wear. When playing, definitely,” the father of Harper Seven told the Telegraph. “But everyone’s different!”

He’s been open about his, ahem, nether regions before — he even admitted that wife Victoria Beckham sometimes calls him “Goldenballs.”

After seeing the ads, we understand why.

And as for his trademark golden strands? They’re still all his.

“Someone said I’d had a hair transplant,” he said to the newspaper. “There’s definitely nothing wrong with doing that, but I don’t think personally I would. If I do start showing signs of going bald, then I will shave it off. I’ve still got hair. I’m still fighting it!”

Sigh… we love you, David.