Zsa Zsa Gabor did one better than show up at her own party fashionably late — she didn’t show at all! The ailing 95-year-old actress failed to make an appearance at her own birthday celebration Monday. 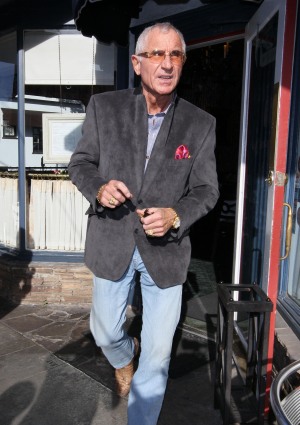 What’s a birthday party for Zsa Zsa Gabor without the guest-of-honor? Monday evening, invited guests gathered at the home of the 95-year-old actress and her husband Prince Frédéric von Anhalt to celebrate, but Gabor was never brought out of her room.

“This night is only a celebration of my wife’s life,” von Anhalt told guests while carrying a chocolate cake through the house, its candles still smoking after Zsa Zsa Gabor had presumably blown them out behind closed doors.

A contributor to the Associated Press, in attendance at Zsa Zsa Gabor’s birthday party, wrote of the affair:

So why throw such a party for Gabor after all she’s been through, especially if she can’t participate? Gabor may not know what’s going on outside her bedroom door, but she can feel the energy, according to von Anhalt.

He said the celebration makes her feel good. He said she’s getting better. He said she wants to live.

The past few years of Zsa Zsa Gabor’s life have been riddled with health issues and quarreling between her husband of 25 years and only child, Francesca.

Following a string of emergency hospital visits in 2010, the star’s leg had to be amputated due to gangrene. Months later, the actress fell into a coma and then later had emergency surgery due to a loose feeding tube that had caused an infection.

Between these battles for health, Prince Frédéric von Anhalt continued to celebrate publicly with his wife. In August, he threw a party at home for their 25th wedding anniversary, which Zsa Zsa Gabor was able to be a part of from her bed. Yet all of the celebrations aren’t sitting well with the ailing star’s daughter Francesca.

After von Anhalt shared a photo of Zsa Zsa Gabor sipping champagne in honor of his birthday, she ranted, “He once again uses my mother to bring publicity to himself. He once again releases photos of my mother in unflattering situations without hair and makeup, two things that were so important to her.”

No photos of Zsa Zsa Gabor’s 95th birthday celebration have yet surfaced.

What do you think of Prince Frédéric von Anhalt throwing his wife a birthday party she was too ill to attend?