Congratulations are in order for Robert Downey Jr. and wife Susan who have welcomed their first child together! 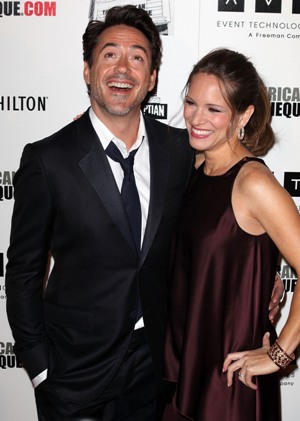 Exton Elias Downey was born at 7:24 a.m. on Tuesday, Feb. 7 in Los Angeles, a rep for Robert Downey Jr. has confirmed to People. The little guy is the first child for the couple who announced the pregnancy publicly last summer.

A friend of the couple reports, “Everyone is healthy and they couldn’t be happier,” adding that baby Exton weighed 7 pounds, 5 ounces at birth.

The actor let slip he and wife Susan were expecting a son in December during an interview with Jay Leno. She commented of her husband’s loose lips, “I could never really stay mad at him, but I can tell you it genuinely wasn’t something we planned to reveal.”

Robert Downey Jr. baby on the way — as predicted! >>

Luckily, the 46-year-old Sherlock Holmes: A Game of Shadows star didn’t spill the baby name beans as well. “If I told you the name, then she would lop off my head with a machete,” Downey added jokingly to Leno.

Speaking of Susan, mother of newborn son Exton Elias, Robert Downey Jr. gushed to Men’s Fitness recently, “What can I even say about her? I’m crazy about her. Everybody’s opinion isn’t right all the time, but as far as averages go, if she wants to, she could hit to the same seat in the bleachers over and over and over again. That sort of consistency is awe-inspiring. We give each other the freedom to explore who and what we really are, which is great, because we’re always changing. I know I’ve changed a fair amount over the last decade, but she’s changed 10 times more than I have.”

Are you a fan of Robert Downey Jr.’s baby name pick?