Beyoncé made her first public appearance since the birth of her baby girl Blue Ivy — and she looks gorgeous! See the first pics of the pop star here. 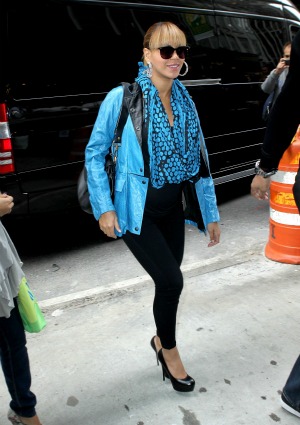 Beyoncé is back! Exactly one month after giving birth to her daughter Blue Ivy Carter, the singer stepped out in support of her husband Jay-Z’s performance at Carnegie Hall — and she looked amazing.

Rocking a body-conscious, rust-colored knee-length dress with ruching from the Alice by Temperley line, Beyoncé’s post-baby body was definitely curvier than a year ago, and in a really, really good way. No longer just bootylicious, she is now also boobalicious and hipalicious!

Jay-Z’s two-night concert, which continues tonight, benefits the Shawn Carter Scholarship Foundation and the United Way. Last night’s gig featured a performance of his new song “Glory” in which little Blue Ivy made her musical debut.

“You’re my child of a child from Destiny’s Child,” he raps in the song, referencing Beyoncé’s musical roots. “Last time the miscarriage was so tragic; We was afraid you’d disappear; But nah baby you magic.” The song finishes with Blue Ivy’s cries in the background.

“I ain’t think I was gonna make it through that one,” Jay-Z, 42, told the audience after performing the song.

So how was the show? Beyoncé, as always, is her hubby’s biggest fan and supporter. “It was amazing,” the new mom told the New York Daily News on her way into the after party, held at Jay-Z’s 40/40 Club.