M.I.A. will foot the bill for any fines imposed on NBC as a result of the finger-wagging good time she had during Sunday’s Super Bowl. Just look, it’s all right there in the fine print. 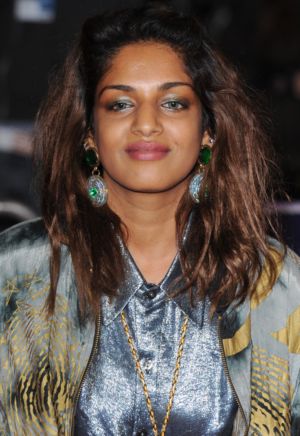 The singer made headlines after she flipped the bird and dropped an s-bomb while performing “Give Me All Your Luvin'” with headliner Madonna and fellow femcee Nicki Minaj at the NFL’s championship game. Now, the incident has reportedly ended the South Londoner’s friendship with the Queen of Pop — and she could even face a hefty fine.

TMZ tattles got their hot little hands on a contract which make Super Bowl performers liable to pay any penalties imposed against NBC by the Federal Communications Commission (FCC). M.I.A. reportedly signed the document, inking her legal name, Mathangi Arulpragasam, right there on the dotted line.

Just how much the lyricist could be out if NBC gets slapped with fines is anyone’s guess — but a $550,000 fine was imposed against CBS following Janet Jackson‘s now infamous “wardrobe malfunction” at the 2004 Super Bowl halftime show.

The brief exposure of Jackson’s tassel-adorned nipple debuted after some overzealous tugging from the fingertips of Justin Timberlake. The incident raised a storm of controversy that kept the network and the FCC tied up in court for years.

After the Jackson affair, censors imposed a fine of $325,000 for each indecency. The precedent means that M.I.A.’s combined expletive and middle finger could cost her as much as $650,000.

Super Bowl scandals are not uncommon. Last year, Christina Aguilera skipped two lines of the national anthem during the opening performance. In 2007, pop icon Prince was silhouetted in an unusual phallic pose with his guitar.

M.I.A. has courted drama in the past, but the musician says flashing her middle finger during the Super Bowl was the result of “adrenaline and nerves,” according to a source.

M.I.A. has not made an official comment about the incident, but a close friend told ABC News that she wasn’t trying to “make any kind of statement” with the obscene gesture. The source insists M.I.A. was simply “caught up in the moment” and full of “adrenaline and nerves” when she sent a giant “Eff You” out to the audience of 114 million viewers.

“She wasn’t thinking. She was caught in the moment and she’s incredibly sorry.”

NBC’s Christopher McCloskey has since apologized for the Sunday’s snafu.

“Our system was late to obscure the inappropriate gesture and we apologize,” Mr. McCloskey said.

The NFL blamed the failure on NBC’s delay system for allowing the image to be seen. An NFL spokesperson said, “The obscene gesture in the performance was completely inappropriate, very disappointing and we apologize to our fans.”

Madonna has been equally unforgiving. As the incident continues to grab headlines across the world, the pop star, 53, is said to be far from pleased that M.I.A.’s funny finger has detracted from her performance.

“Madonna wasn’t impressed. She prides herself on professionalism,” a source told The Sun newspaper. “M.I.A. did nothing similar in rehearsals. Nobody knew she was going to pull this stunt.”

“Madonna wanted to put on a world-beating performance. But everyone ended up talking about this girl’s middle finger.”