This is what happens when you’re a Patriots fan! You end up nearly naked and shivering next to Mario Lopez in the middle of Times Square! Of course, there’s always the chance that you might pique the interest of Tim Tebow! 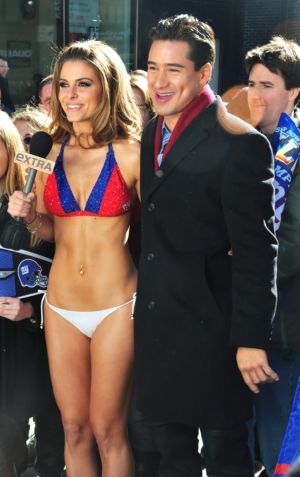 There are some disadvantages that come with rooting for the losing team.

For instance, losing your clothing.

The Massachusetts-born brunette beauty is a longtime fan of the home team — even after the Pats’ 21-17 fall to New York in Sunday’s Super Bowl XLVI. The terms of the bet specified that Menounos would “bare all” if the Patriots lost, while Calloway would have to wear a Patriots cheerleader outfit.

Menounos disrobed to reveal a sparkly red and blue top and brief white bottoms after Sunday’s defeat. She wisely kept warm by rocking a pair of Ugg boots on her feet.

Maria tweeted a photograph of herself earlier in the day, wearing her robe with the caption, “Ready to face the music.”

“Flying to ny now… today is gonna stink. At least it’s not bitter cold there. Should be 50 degrees I hear.” she later tweeted.

Maria got kudos from her co-host for being a good sport.

“My girl @mariamenounos lost a Super Bowl bet & had to wear a NY Giants bikini! Big props..Look great,” AJ replied on his own Twitter page.

But Calloway isn’t the only guy impressed by Maria’s fabulous figure.

In other Menounos news, Denver Broncos quarterback Tim Tebow has reportedly set his sights on the entertainment journalist. Word ’round the blogosphere has it that the squeaky-clean, über-Christian footballer is quite smitten with the reporter, who he met at an ESPN-hosted pre-Super Bowl party in Indianapolis last Friday night.

“Wow! She’s not only gorgeous, she’s really sweet, too,” Tebow was allegedly overheard whispering to another guest.

Spywitnesses tell The Chicago Sun-Times the two were later seen getting chatty over apetitzers.