Karl Lagerfeld caught a case of foot-in-mouth disease when he commented on British singer Adele’s weight during an interview with a Paris newspaper. 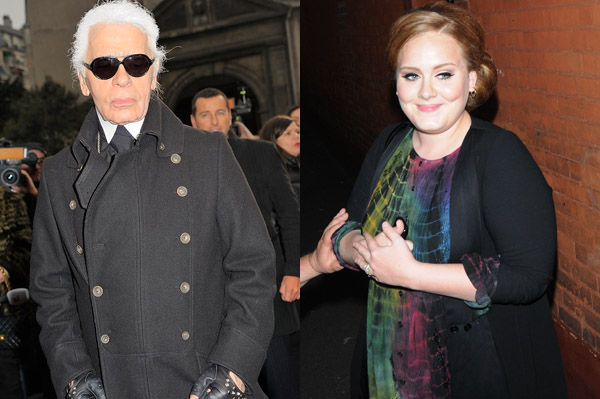 Chanel’s Karl Lagerfeld is known for being outspoken, but he might have stepped over a line this time when it comes to British singer Adele. The designer did an interview with Paris’ Metro magazine and made a comment about the singer’s weight.

“The thing at the moment is Adele,” Lagerfeld said. “She is a little too fat, but she has a beautiful face and a divine voice.”

Talk about a backhanded compliment!

The white-haired couture creator didn’t add anything else, but some celebrities are already calling for his head.

“Karl Lagerfeld said Adele’s voice divine, face beautiful, but she’s a little 2 fat — this is why we have issues with these kids 2day — stick to handbags Karl,” Real Housewives of New Jersey star Caroline Manzo wrote.

We’re pretty sure the 23-year-old singer doesn’t care what Lagerfeld — or anyone else — has to say about her body.

“My life is full of drama and I won’t have time to worry about something as petty as what I look like. I don’t like going to the gym,” she told Rolling Stone in 2011. “‘I like eating fine foods and drinking nice wine. Even if I had a really good figure, I don’t think I’d get my t**s and a** out for no one.”

Plus, the “Someone Like You” scribe said she doesn’t associate with people who are superficial about looks or the numbers on a scale. “It’s just never been an issue — at least, I’ve never hung out with the sort of horrible people who make it an issue. I have insecurities of course, but I don’t hang out with anyone who points them out to me,” she told British Vogue.

Do you think Karl Lagerfeld stepped out of line with his Adele comments?