NBC unveiled its new musical drama, Smash, Monday night and we’ll save you the trouble of suffering through a bunch of Smash-esque puns — it actually lived up to the hype.

We’re just going to start off by saying everything we thought Smash was going to be in comparison or contrast to Glee is no longer. We thought we’d be making a big old check list about how one does “this” better, or how one does “that” different — but we weren’t even thinking about Glee while watching Smash.

After viewing the pilot, it’s no longer about whether or not Smash succeeds as an adult version of Glee or how many musical elements it can fit into an episode. It’s about the human dream, both professionally and personally, and for that reason, it was easy to become invested in the characters and stories.

Smash “celebrates the beauty and heartbreak of the Broadway theater as it follows a cross section of dreamers and schemers who all have one common desire — to be a Smash.”

They’re all brought together by one common thread: Launching Marilyn: The Musical, while juggling their personal lives.

We’ll admit, we went into the pilot hoping for the best, but half expecting to see cheesy song and dance numbers with forced plots that were so recycled we’d tune out after 10 minutes.

What we got, however, was multi-layered characters, perfectly placed musical sections and moving plots that left us not disappointed in the show, but in the fact that the hour went by so fast! 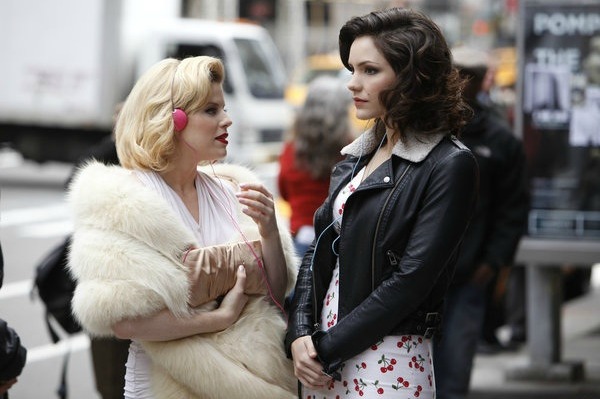 Katharine McPhee (Karen) and Megan Hilty (Ivy) couldn’t have been cast better as two different actresses, each perfectly suited for the role of Marilyn Monroe.

As a viewer, you felt for newbie Karen’s need to catch her first break, but also veteran Ivy’s desperation to get out of the chorus. The human heartbreak of wanting something so bad for two very opposite reasons was felt in abundance by these two magnificent breakouts.

Debra Messing’s portrayal of a successful Broadway songwriter in the process of adopting is annoying and empowering — both in good ways. You find yourself rooting for her quest to have the best of both worlds, but you also want her to put down the music and go be with her family.

Debra Messing belongs on TV, there is no doubt.

Then there’s the iconic Anjelica Huston. She commands grace and power as a producer stuck in the middle of a nasty divorce that could take everything she has — business-wise. Her game face is extraordinary.

After this delicious pilot came to an end, we couldn’t help but hope for the same thing the characters in the show were/are hoping for — a smash!

We want to hear your thoughts! Did you catch Smash? Head over to our comments section and sound off!