Ricky Martin is bringing his ultra-hot, hip-shaking moves to McKinley High this week and things are about to get sexy. Welcome to Glee, Ricky Martin! 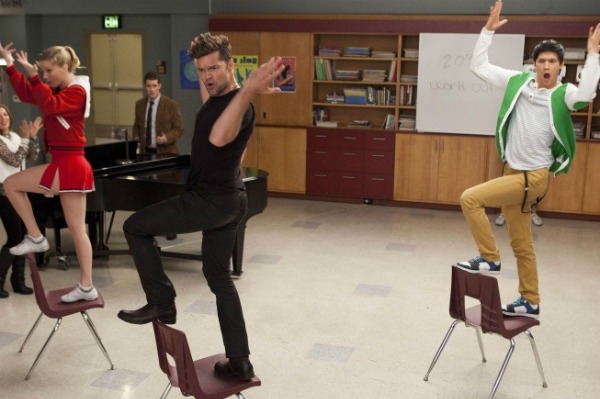 Ricky Martin appears as a Spanish teacher enlisted to help Will on this week’s episode of Glee, “The Spanish Teacher,” and from the looks of the preview, we’re wondering: Is it weird that he’s getting down with the students to “I’m Sexy And I Know It?”

When you watch the teacher/student relationships on Glee, you kind of have to suspend your disbelief — come on, they sing and dance at the drop of a hat.

Mr. Schuester’s past take on Britney Spears’ “Toxic” with the kids was borderline inappropriate — you just go with it.

Check out the video of Ricky Martin shaking his caboose with the kids and hit up the comments section: Is it perfectly normal or creepy? We’re going with perfectly normal — it’s Glee, people!

Elsewhere, now that Rachel is a NYADA finalist, she has to deal with saying yes to marrying Finn.

This week, she opens up to Kurt and Mercedes, but Mercedes has her own “love complications” to deal with.

Season three has been guest-filled with names like NeNe Leakes, Ricky Martin and the voice of Helen Mirren hitting the scene. Gloria Estefan is also on deck to play Santana’s mom.

Head over to our comments section and sound off! Who has been your favorite guest star of all three seasons of Glee? Don’t forget to weigh in on Ricky Martin!