Nick Carter has opted to skip sister Leslie Carter’s funeral in New York. Find out the complicated reason why he’s not going. 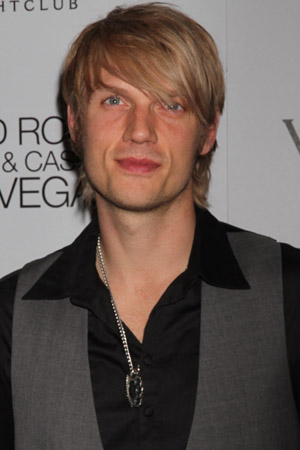 One important member of the Carter clan was missing from Leslie Carter’s funeral this weekend in New York: oldest brother Nick Carter. The youngest member of The Backstreet Boys revealed that his family’s “complicated dynamic” kept him from the service.

“I wanted to be at my sister’s funeral, but my family has always had a complicated dynamic,” Nick, 32, said in a statement. “I love my family. I want to thank everyone for all of their compassion and support that I have received during this most difficult time. There are so many emotions for me surrounding the loss of my sister. I am trying to stay healthy, positive and focused.”

Leslie, 25, died on Jan. 31 from an alleged overdose of prescription medication. Her stepmother, Ginger Carter, said she took her meds for depression and schizophrenia before her death.

“On 1/31/12… Ginger Carter called 911 to report that Ashton [Leslie’s married name] was asleep on her bed and not breathing… [Ginger and Robert] stated that Ashton has a long history of mental illness and was on medication for her depression,” reads a police report taken after her death.

Nick was understandably devastated by his sister’s death — as was younger brother Aaron Carter. However, Aaron opted to drop out of his Broadway show, The Fantastiks, to head to the funeral. Nick opted to keep with his tour schedule.

“Performing is cathartic to me and I am dedicating the rest of my tour to my sister since she loved to watch me perform,” he said.

A source told TMZ that Nick feels like his family kept the details about the funeral from him. Aaron was there, though — and his recent tweets are cryptic and hint at family strife.

“My “Family” Appreciates your love and prayers, My Father (Bob Carter) My mother (Jane) (Angel) (Bobbie Jean) & her husband (Mike Ashton),” Aaron wrote Monday afternoon. “The truth will reveal itself. I Love you Leslie soo very very very very very much!! virtually no words. You will always be my best friend.”

“My heart is completely broken.. #signingoff.”

Should the Carters put their differences aside after Leslie Carter’s death?