Katy Perry is in dire need of some male attention, if her Super Bowl weekend flirting is any indication. 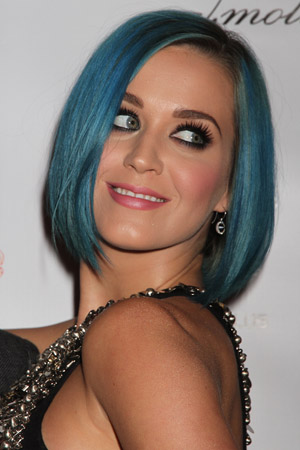 Katy Perry doesn’t seem to be too heartbroken over her divorce from Russell Brand. The 27-year-old “Firework” singer took her flirting to Indianapolis over the weekend during Super Bowl XLVI — and she didn’t discriminate!

Her first object of affection? NFL rookie Cam Newton. Perry presented Newton with an Associated Press NFL Award and told him to get ready for a sexy photo op.

“You’ll be the first straight man I’ve had a photo with in a long time, so live up to it,” a confident Perry told Newton.

She was far from done, though — the singer later dedicated her raunchy song “Peacock” to the virginal Tim Tebow. It was likely a remark about the rumor that Perry’s parents wants her to date the young Denver Broncos quarterback.

“[Katy’s] mentioned on more than one occasion how much she likes Tim. Katy’s mom firmly believes the best cure for heartache is to quickly fall in love again. In her mind, Tebow is the perfect guy for her daughter. He’s handsome, charming, intelligent and, above all, a good Christian,” a source told OK! Magazine in January.

Her flirting wasn’t relegated to athletes, though. Perry performed at the DirecTV pre-Super Bowl XLVI party on Saturday night and brought a smitten fan up for a kiss.

“I want to give you a present because you were so nice. You took your t-shirt off for me,” Perry told the fan. “You’re a little bit nervous but not as nervous as you should be.”