M.I.A. gave a clear message to the world during the Super Bowl XLVI halftime performance Sunday night. NBC apologized, but that’s not enough for at least one parent group. 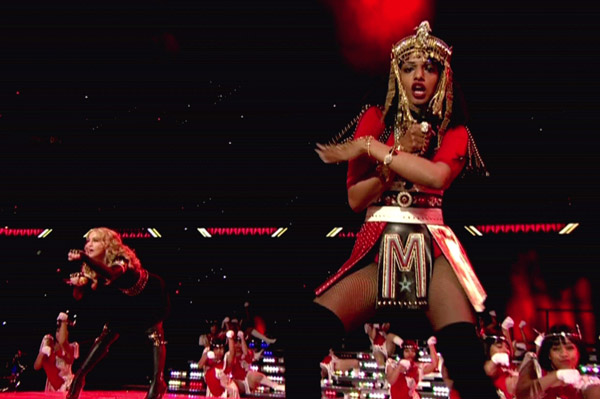 It was the middle finger heard ’round the world. British singer M.I.A. appeared with Madonna and Nicki Minaj during the halftime show at Super Bowl XLVI and managed to flip off the television cameras for several seconds.

Now, NBC is getting the heat for her rebellious move.

“There was a failure in NBC’s delay system,” spokesman Brian McCarthy said in a statement. “The obscene gesture in the performance was completely inappropriate, very disappointing, and we apologize to our fans.”

M.I.A. also appeared to say “s**t” during the performance of “Give Me All Your Luvin’,” but the network isn’t suspected to get a FCC fine for that.

At least it wasn’t a nip slip, à la Janet Jackson… right? The Parents Television Council doesn’t think so – and they’re blasting the NFL and NBC for letting her take the stage.

“NBC fumbled and the NFL lied because a performer known as M.I.A. felt it necessary to flip off millions of families,” wrote PTC president Tim Winter. “It is unfortunate that a spectacular sporting event was overshadowed once again by broadcasting the selfish acts of a desperate performer.”

McCarthy insisted that the “Paper Planes” singer didn’t use the finger in rehearsals that NBC reviewed. That’s not good enough for the PTC.

“It has been eight years since the Janet Jackson striptease, and both NBC and the NFL knew full well what might happen. They chose a lineup full of performers who have based their careers on shock, profanity and titillation. Instead of preventing indecent material, they enabled it. M.I.A. used a middle finger shamelessly to bring controversial attention to herself, while effectively telling an audience filled with children, ‘F**k you.'”

They’re calling for sanctions against M.I.A., but it’s not clear if NBC can actually do anything to the singer. You know times are changing when Madonna isn’t the one creating chaos.

Do you think M.I.A.’s bird flip was a big deal?