Courtney Love is planning to sue whoever is responsible for leaking supposedly confidential court papers in which daughter Frances Bean Cobain described her as a pet-killing, pyromaniac drug addict. Does she have a case? 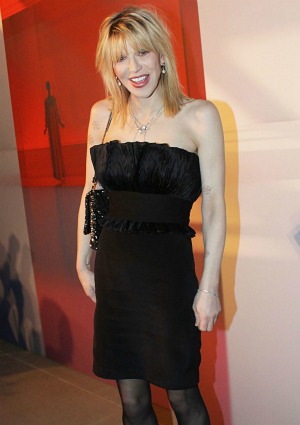 It’s got to hurt when your own daughter goes to court to permanently remove you from her life. For Courtney Love, the sting is twice as strong now that the deposition given by Frances Bean Cobain to secure a restraining order against her mom has been made public. In fact, Love is so ticked that she plans to find out who is responsible for the leak and take ’em to court.

In the deposition — which Love claims was supposed to be sealed — her then-17-year-old daughter Frances Bean Cobain claimed the Hole front woman popped pills like they were Tic Tacs, was a hoarder whose mountains of crap caused her cat to be crushed to death, almost burned down the house three times because she was smoking in bed and killed the family dog because he ate her stash of prescription drugs.

The papers also revealed Love to be paranoid and obsessed with the idea that people were stealing huge amounts of money from the vast estate of Kurt Cobain.

The contents of the deposition were revealed in a Courtney Love ebook published by TheFix.com last week, and Love’s legal team is already hot on the case.

“I was the lawyer who worked on these [family court] proceedings in Los Angeles, and the filing was confidential and sealed as is customary in these kind of cases,” attorney James Janowitz told the New York Post. “I don’t know how they were disclosed… When I find out what happened, we will take the appropriate legal action.”

“For somebody to meddle in such private and personal matters is pretty reprehensible,” Janowitz said. “We can say that all of the statements made about [Love] relating to the court filings, her daughter and other personal matters are false.”

However, the editor of TheFix is standing by his story.

“I honestly regret that Courtney is upset,” Maer Roshan said. “While there’s been lots of press about the deposition, reviews of the book have universally commented on its nuanced and empathetic portrayal… As most people know, Courtney is not a model of discretion… The details about the deposition are absolutely true, and I stand by every word in the book.”

Tell us: Should TheFix have published Frances Bean’s deposition?