Demi Moore has checked into rehab following her disturbing hospitalization — but one famous friend says we shouldn’t jump to conclusions. How did Miley Cyrus get involved in all this? 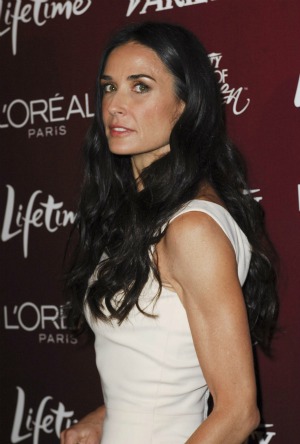 After much dragging of feet, Demi Moore has finally agreed to enter rehab less than two weeks after her hospitalization for a drug-induced seizure.

A source told E! News that Moore checked into the exclusive Cirque Lodge treatment center in Sundance, Utah — the same place Lindsay Lohan, Eva Mendes and Mary-Kate Olsen have sought help in the past.

“She’s on total lockdown and only talking to a small group of people,” the source revealed, adding that the actress is being treated for an eating disorder and addiction issues.

“It became clear to her that her way of coping with her stress was not working and she needed more help,” the source said.

In the midst of her ongoing drama, Moore appears to have gained a surprising ally: Miley Cyrus. According to RadarOnline, the former Disney star defended Moore against the rumor mill on Twitter over the weekend.

Did a high school drug cause Demi Moore’s seizure? >>

“How can you talk c**p on someone you don’t know?” the Disney star tweeted. “Just because she’s in Hollywood doesn’t mean she’s on drugs. NOT EVERYONE IS ON DRUGS!!!”

“Put yourself in her shoes. How are you supposed to hold up while everyone in the world is so naïve and they believe everything the media says? Almost her entire life has been in the public eye.”

Sounds great and all, except the tweets don’t show up in Cyrus’ feed and she totally denies she ever said any of it.

“Why do people make stuff up,” she wrote. “Demi has been nothing but a great friend 2 me & I’ll never speak out on her private life! Its nobodys business.”

Moore was reportedly in attendance at the birthday party of Cyrus’ boyfriend Liam Hemsworth where the teen went to town on his X-rated cake. Nine days later Moore was rushed to the hospital.