All those prayers didn’t help Tom Brady on Sunday, as his New England Patriots lost to the New York Giants in Super Bowl XLVI. Luckily, he’s still got Gisele Bündchen to wipe away his tears. Supermodel. Superspouse. 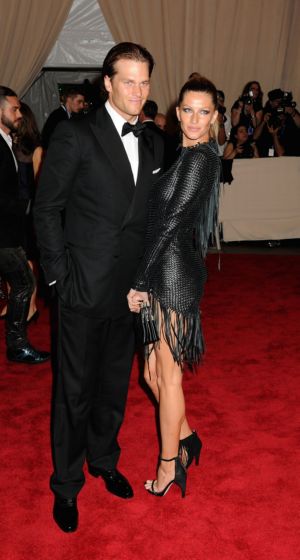 A call for prayers apparently didn’t do much good in helping Tom Brady and his New England Patriots avoid the same fate in Super Bowl XLVI that befell the team in Super XLII: Crushing defeat to the New York Giants in the fourth quarter.

The team has come up short in its last three games against the Giants. But it was the 21-17 fall to the boys from the Big Apple on Super Bowl Sunday that left celebrated quarterback Brady looking depressed and despondent during post-game interviews with reporters.

It’s a good thing Brady’s supermodel bride, Gisele Bündchen, was on hand to give him a hug afterward.

Then again, Gisele’s been in his corner all the time.

In a missive sent to “sweet friends and family” last week, the one-time Victoria’s Secret Angel requested prayers for her husband.

“I feel Tommy really needs our prayer, our support and love at this time,” she wrote in the e-mail, which somehow made its way online last Friday.

Gisele’s suggestion: “Envision” victory for Tom and the Patriots.

“So I kindly ask all of you to join me on this positive chain and pray for him, so he can feel confident, healthy and strong. Envision him happy and fulfilled experiencing with his team a victory this Sunday.”

Gisele was anything but saintly when fans yelled at her on her way to the Patriots locker room to meet her hubby after Sunday’s loss.

Bündchen uttered an expletive in response and countered with a bash aimed at her husband’s wide receivers.

Gisele took an angry swig of her bottled water before disappearing onto an elevator.