Supermodel Heidi Klum is silently fuming with her estranged husband, Seal, And it’s all because of the allegedly hot-tempered crooner’s recent publicity blitz in the wake of the former couple’s split. 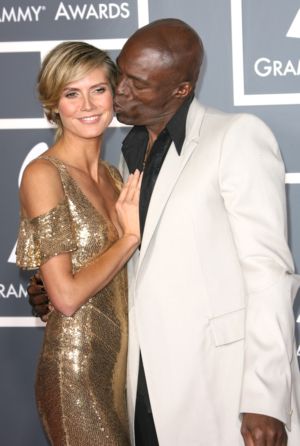 It all seemed a little too “coinkidinky,” watching Seal make the talk show rounds a nanosecond after his split from supermodel Heidi Klum.

The crooner was on Ellen, Piers Morgan Tonight and Access Hollywood Live all the while gushing about his soon-to-be ex-wife, “the most wonderful woman in the world.”

Apparently, Klum, who has kept mum on the subject save for a short thank-you-to-fans tweet, isn’t so keen that Seal can’t seem to keep his crooning trap shut in the wake of their bust-up.

If Us Weekly tattles are to be believed, Heidi is “ticked off” about Seal’s newfound gabbiness and has been telling anyone who’ll listen that his on-air soul-searching is just downright “insensitive.”

Of course, Seal’s rep points out that his interviews, promotion for his covers compilation Soul II, were scheduled well in advance of the couple’s separation announcement.

Meanwhile, more details are emerging about Seal and Heidi’s breakup.

Heidi Klum breaks her silence on her divorce >>

A number of sources, including an ex-girlfriend of the “Kiss from a Rose” singer, have made claims about his “violent temper.” Now Star magazine is reporting that Seal had to be restrained by security after he shoved Heidi during an argument last month.

“Heidi told friends that Seal just lost it,” an insider squealed to the mag. “He was screaming and, she said, he pushed her. It was horrible.”

Apparently a security guard had to intervene.

“He had to physically restrain Seal.”

Well, that would explain the sudden divorce announcement on Jan. 23.

Seal may have dangled the idea of a reconciliation during one of his chat show confessionals, but a source tells Us that the exes “have zero plans to get back together.”