Russell Brand has ended his marriage to Katy Perry. Zooey Deschanel recently split from her husband, Ben Gibbard. Now it appears the two single stars are finding comfort in each other. 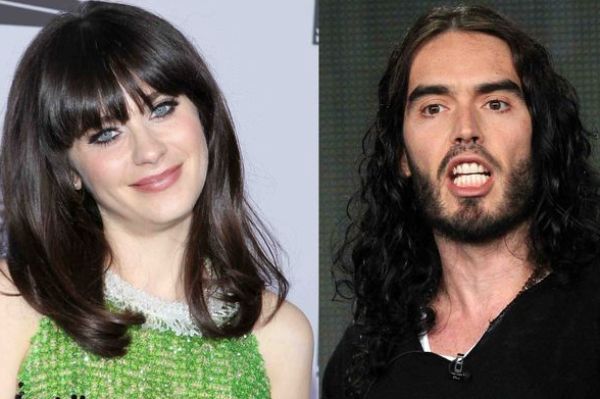 Considering how many women he claims to have slept with, we didn’t think Russell Brand actually had a “type.” But that isn’t the story OK! magazine tattles are telling.

Just a month after his split from Katy Perry, the reformed lothario has reportedly got a mega-crush on her doppelganger, Zooey Deschanel. We hear Russ has been in contact with the “hysterically funny and cute” actress — who just happens to be a dead ringer for his estranged wife.

On Dec. 30, the comedian announced he and his pop star bride were splitting up after 14 months of marriage. Sources claim the British funnyman has already moved on, forming a bond with Zooey.

The pretty brunette has garnered positive reviews, and a Golden Globe nomination, for her starring role in the Fox TV comedy New Girl. Brand is said to admire Deschanel’s talent and the duo has been corresponding via text messages over the past few weeks.

“Russell is a big fan of Zooey and would love to work with her in the future. He’s been in contact, asking to meet up,” an OK! insider squealed. “He thinks she’s hysterically funny and cute, too. He loves her quirky sense of humor. There seems to be a spark there.”

Zooey split from her husband of two years Ben Gibbard in November.

“Zooey doesn’t know whether she’ll meet up with Russell yet. She’s still recovering from the breakdown of her own marriage.”

Zooey is said to be “intrigued” by Russell’s interest in her, “but she’s heard about his reputation as a womanizer and isn’t sure whether she’s ready to rush into another relationship so quickly,” said the source.

Deschanel, 32, made a name for herself in box comedies, such as Elf, Yes Man and (500) Days Of Summer. But she has enjoyed something of a career revival of late thanks to her role in New Girl.

Zooey plays Jess, a quirky and eccentric teacher who finds herself some new friends after moving in with three male roommates following a nasty split from her boyfriend.

The comparisons between Katy and Zooey are pretty obvious (they pretty much look like twins, right?) and the actress admits she’s often mistaken for the “I Kissed a Girl” singer.

The starlet is also apparently “very aware that she looks strikingly similar to Katy and has been mistaken for Katy by fans.” When asked in a recent interview with Allure magazine if she minded being compared to Katy, Zooey replied, “No, she’s really pretty!”