Are new parents Jay-Z and Beyoncé pulling a page from the book of Brangelina and eyeing a move to Europe? That’s the word ’round the Twitterverse. 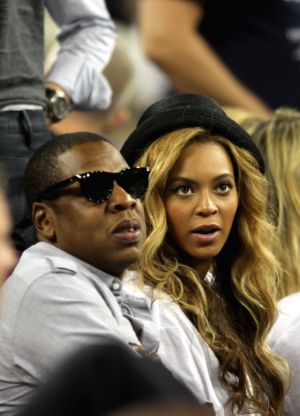 Could Beyoncé be bound for Britain? Or maybe even France?

Word on the curb has it that the “Single Ladies (Put a Ring on It)” singer and her husband Jay-Z are contemplating a move to Europe — France or Britain, to be exact — so that they can raise their newborn daughter, Blue Ivy away from the glaring lenses of the paparazzi.

The couple, who became proud parents to baby Blue on Jan. 7, are considering the move, which they believe will give them more privacy to raise the tot. The international move is similar to ones taken by celebrity duo Brangelina and Johnny Depp and Vanessa Paradis.

“I can even see them moving to somewhere like France, like Brad Pitt and Angelina Jolie, where they won’t get harassed by paps and can bring Blue up as part of a normal family,” a source told Look magazine.

If the Twitter rumor mill knows its business, England is also tops on the list of European locations where Jayoncé could plan to raise their first child. The celebrity pair is said to have purchased a home in the Surrey village of Limpsfield.

The area, known as the “British Beverly Hills,” is home to a host of U.K. big names, such as Katie Price and Mohamed al Fayed. Mary Dodd, who lives in nearby Oxted, was among those who tweeted the news, writing, “OMG Jay-Z bought a house in Oxted! They bought Blue Ivy a house in Sandy Lane, so weird!”

We all know how private Jay-Z and Beyoncé like to be. Hip-hop’s royal couple fell under public scrutiny over the security measures they took to shroud Blue’s birth in secrecy.

Not only did they have their own team at Manhattan’s Lenox Hill Hospital, but they also commissioned a customized car to make the getaway back to their Manhattan penthouse. The couple even deliberately tricked the public into thinking the baby was due in February so they could avoid the media circus.

If you choose to believe the rumors, Beyoncé and Jay-Z, could well be the most over-the-top celebrity parents ever. In Touch Weekly claims the duo has hired two nannies to be at baby Blue’s beck and call at all times.

Blue Ivy is also kept super-squeaky clean, with a friend telling the mag, “Her diaper is changed every hour.”