Madonna performed the Halftime Show at the NFL Super Bowl XLVI match-up between the New York Giants and the New England Patriots on Sunday. The Material Girl rocked Lucas Oil Field in Indianapolis, Indiana as an estimated 100 million Americans looked on. How’d she do? 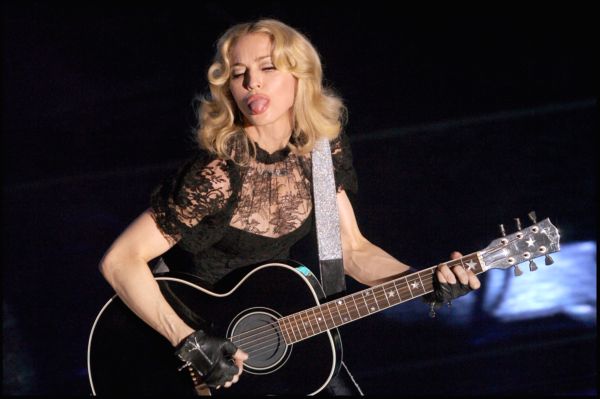 The brief exposure of Janet Jackson’s nipple at the 2004 Halftime Show raised a storm of controversy that put then broadcaster CBS in hot water with the almighty Federal Communications Commission. (The incident also introduced a new phrase into the English vernacular: “Wardrobe Malfunction.”)

Eight years later, M.I.A. used another body part to stir up the censors during the biggest U.S. television event of the year. NBC issued a public apology after the “Paper Planes” hit-maker nearly upstaged the Material Mom with a one-finger salute and a barely-disguised expletive at Sunday’s show.

The blink-and-you’ll-miss-it moment came during a performance of Madonna’s new single, “Give Me All Your Luvin’.” The lead single from Madge’s forthcoming LP M.D.N.A. features the vocal stylings of M.I.A. and Minaj. At the end of her verse, M.I.A. blasted “I don’t give a f**k” before firing off a one-finger salute to the roving camera.

The screen briefly went blurred after the obscene gesture, a late attempt to cut out the camera shot.

“We apologize for the inappropriate gesture that aired during halftime,” NBC spokesman Christopher McCloskey said a short time later. “It was a spontaneous gesture that our delay system caught late.”

M.I.A. has been off the pop radar since the release of her long-delayed third album, Maya, in 2010. But she’d been excited leading up to her performance at the weekend game, glad to position herself alongside the Queen of Pop and her partner in rhyme, Minaj.

“I’ve never been to the Super Bowl, so it’s my first time,” the Grammy-nominated star told BBC Radio last week. “I’m going to be performing with Madonna and Nicki Minaj. If you’re gonna go to the Super Bowl, you might as well go there with America’s biggest female icons.”

M.I.A. is no stranger to creating controversy on stage. The Sri Lankan star sent a loogie flying onto an unassuming photographer during a critically-panned performance at the Hard Fest NYC music festival two years ago.

Madonna rocks the house with oldies and a new hit

But M.I.A. was only one part of a glittering, opulent show that mixed Madge’s latest musical offering with a host of her ’80s and ’90s radio staples. The Material Girl wowed Super Bowl gawkers with a high-octane show, which began with an army of Roman gladiators and ended with a plea for “World Peace” written in lights.

Dressed as Cleopatra, Madonna looked every bit the part of Roman royalty as muscle-bound men carried her extravagant throne across the football field to the stage for her opening song, the 1990 dance hit “Vogue.” With spear-wielding gladiators in gold marching onto the field, Madonna — with a diamond-studded crown and kinky thigh-high boots — kicked off the first Halftime Show headlined by a female vocalist since Janet’s nip slip snafu.

The singing and dancing was smartly choreographed. After all, the Material Mom is 53.

Madonna moved deliberately, but briefly stumbled while trying to make a step on the stage set. There was another cringeworthy misstep as her half-hearted attempt at a handstand fell flat.

Time to call for backup!

Bringing out breakdancers — and an impressive tight-rope walker — electro duo LMFAO sampled their 2011 hit “Sexy and I Know It” as they joined Madge for a rendition of her tune “Music.”

Next up came the Glee cheerleader-themed “Give Me All Your Luvin.'” That’s when hip-hopster Nicki Minaj and the irreverent M.I.A. burst onto the stage, complete with golden pom-poms, a marching band, lighting and other visual effects contributed by the Canadian performing troupe Cirque du Soleil.

A mini-medley of the hits “Open Your Heart” and “Express Yourself” ushered in the finale. Madonna closed her act decked out in a gospel-goth black gown as she performed 1989’s “Like a Prayer,” with a little help from The Voice’s Cee Lo Green. A black-robed gospel choir belted out the chorus as the stadium illuminated with thousands of tiny lights, concluding with the words “World Peace.”

Madge then dropped out of sight in a puff of smoke.

“Now THAT was a halftime show!” said @michaelsette7 of Toronto, via Twitter. “All hail the queen. Bow down everyone, bow down!

Entertainment Weekly pundit Ken Tucker agreed, calling Madonna’s performance “joyous, unironic, open-hearted… She was both in full command and full of generosity towards her massive audience.”

Celebs have shared mixed reactions across the Twitterverse:

At a press conference on Friday, Madonna, a native of suburban Detroit, described her Super Bowl appearance as “a Midwesterner girl’s dream.”

“In over 25 years of performing that I’ve done, I have never worked so hard or been so scrupulous or detail-oriented or freaked out as much as I have,” the Rock and Roll Hall of Famer said.

This year’s game, in which the New York Giants beat the New England Patriots 21-17, is expected to challenge last year’s record for the most-watched U.S. TV event ever.

Watch Madonna’s half time show at the 2012 Super Bowl:

See M.I.A. give the one-finger salute during the 2012 Super Bowl half time show:

From Paul McCartney to Prince and the Black Eyed Peas: Which artists have delivered the best Super Bowl halftime performances? Did Madonna top your fave?