“You know, Marty, I feel a song coming on…” The 1985 futuristic hit film Back to the Future is being eyed for a debut on the Great White Way. 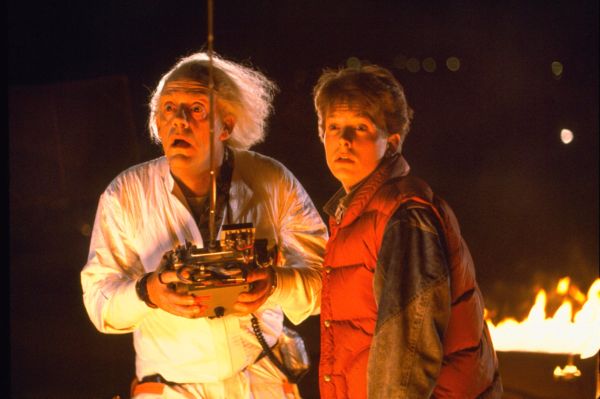 “Great Scott!” Lace up your dancing shoes, theater fans: Back to the Future may be getting the Cats treatment with a live-action stage musical.

Director Robert Zemeckis — the lensman behind the Michael J. Fox/Christopher Lloyd cinema classic — is in chats to bring the 1985 film to Broadway! We hear the original Back to the Future director is in early talks with co-writer Bob Gale and film composer Alan Silvestri about adapting the movie into a musical stage production.

Music, after all, was already a driving force throughout the film — from the Huey Lewis theme tune “The Power of Love” to Marty McFly’s futuristic rendition of “Johnny B. Goode.”

Deets are scarce, but we hear that Zemeckis’ production company, ImageMovers, would be heavily involved with the proposed production.

Back to the Future was the highest-grossing movie of the year. The film also starred Crispin Glover (Willard) and Lea Thompson (Caroline in the City). It went on to spawn two sequels and a ride at Universal Studios.

This isn’t the first time, the film trilogy has been transplanted to other areas of pop culture.

Remember the power sneakers that made such a splash in 1989?s Back To The Future II? In 2011, Nike made those new-fangled sensations a reality. Marty McFly’s (Fox) famed self-lacing sneakers in the film inspired Nike to launch their own fashion-forward kicks.

The 2011 Nike Mag were a “precise replica” of the Nike Air 2015 Kicks that Marty found when he traveled with Dr. Emmett “Doc” Brown (Lloyd) to 2015. Approximately 1,500 pairs of the automatic lace-up sneakers were sold and auctioned on eBay with net proceeds going to Parkinson’s Disease research through the Michael J. Fox Foundation.

There’s already widespread chatter that the sneakers will be released commercially for a lot cheaper in 2015. Life imitating art indeed!