Miley Cyrus is dedicated to fighting for marriage equality. In an open letter the former Hannah Montana star writes of death threats she received after announcing her stance on the hot-button issue. 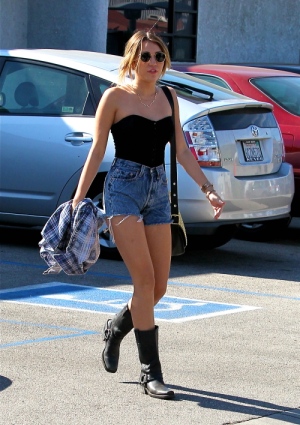 Miley Cyrus isn’t giving up fighting for gay rights, despite receiving death threats after revealing her “All LOVE is equal” tattoo on Twitter. The 19-year-old daughter of Billy Ray Cyrus recently wrote of her feelings on marriage equality in an essay for Glamour.

Imagine finding someone you love more than anything in the world, who you would risk your life for but couldn’t marry. And you couldn’t have that special day the way your friends do — you know, wear the ring on your finger and have it mean the same thing as everybody else. Just put yourself in that person’s shoes. It makes me feel sick to my stomach.

When I shared a picture of my tattoo on my Twitter page and said, “All LOVE is equal,” a lot of people mocked me — they said, “What happened to you? You used to be a Christian girl!” And I said, “Well, if you were a true Christian, you would have your facts straight. Christianity is about love.” The debate resulted in a lot of threats and hate mail to people who agreed and disagreed with me. At one point I had to say, “Dude, everyone lay off.”

Can’t people have friendly debates about sensitive topics without it turning into unnecessary threats?

I believe every American should be allowed the same rights and civil liberties. Without legalized same-sex marriage, most of the time you cannot share the same health benefits, you are not considered next of kin and you are not granted the same securities as a heterosexual couple. How is this different than having someone sit in the back of the bus because of their skin color?

One day I read online about the head of Urban Outfitters donating to a presidential candidate who does not support equality for everyone. I was shocked and disappointed that a company with such diversity would exclude such a large group of people. I can no longer bring myself to shop there.

We all should be tolerant of one another and embrace our differences. My dad [country singer Billy Ray Cyrus], who is a real man’s man, lives on the farm and is as Southern and straight as they come. He loves my gay friends and even supports same-sex marriage. If my father can do it, anyone can.

This is America, the nation of dreams. We’re so proud of that. And yet certain people are excluded. It’s just not right.