Want to check out the first scenes from the upcoming The Amazing Spider-Man? Find out if it’s coming to a city near you next week. 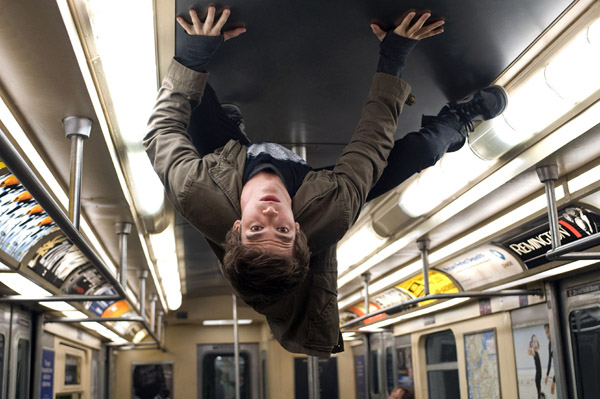 The Amazing Spider-Man is taking over the world… literally. Cryptic Spider-Man projections have been spotted in locales around the world, including Los Angeles, Paris, Rome and Tokyo. Fans who spotted the images and snapped them with their mobile cameras were transported to a website with never-before-seen information about the film.

Much more original than the typical marketing campaign for movies, don’t you think?

We’re pretty stoked for the release of The Amazing Spider-Man, set for July 3. Garfield is just hoping all of the work paid off — he worked on the film for seven intense months.

“It’s crazy. I feel like I lost a sense of myself for a while… It was very hard work. I worked my butt off,” he told E! News in June.

“As you can see, a lot of the stunts are practical and grounded in reality,” he added to Access Hollywood. “That was something that Marc [Webb], the director, really wanted to make sure happened in this movie to set it apart from previous ones. I would exhaust myself every day and get into near-death experiences every hour on the hour.”

“I collaborated with [the stunt team] not only on the big stunt set-pieces, but also on what happens to Peter’s body when he gets bitten…” he added. “The idea that he has spider DNA running in his system. What that will do to his sense of space. What that will do to the sensitivity of his skin. To have an opportunity to play in that forum with creative and talented people was a real opportunity and gift.”

Intense! Still, we’re most excited for the kiss between Garfield’s Spider-Man and his real-life girlfriend, Stone.

“You don’t want to know! You want to watch the movie and find out,” the red-haired actress told Access Hollywood when asked about the kiss.

“Plus, it would be weird if we were like, ‘There’s something iconic coming up!’ You’ve got to decide if it’s iconic or not,” she added. “But there is a nice first kiss and it’s different than the upside down one. And we liked it.”

Watch the teaser reel for The Amazing Spider-Man