Jen of Devourer of Books gives SheKnows’ Book Club readers details on the must-read The Weird Sisters by Eleanor Brown, which is new in paperback.

The youngest of the three Andreas sisters, Cordy, has been on the road and away from home for some 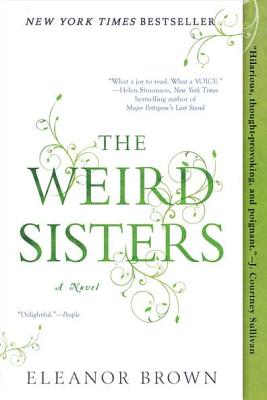 time. After drifting through her life, though, she finds herself needing to return home, not least because she has discovered that she is pregnant with the child of a man she is no longer in touch with. Bean, the middle sister, is finding herself in similarly dire straits, having been let go from her job for embezzlement. Her employer isn’t pressing charges, but she has to find a way to pay the money back. No longer can she attempt to maintain her New York lifestyle, where she always feels the need to do as well or better than her friends and neighbors.

Of the three girls, only the oldest, Rose, appears to be doing well. She has stayed close to home and is both engaged and gainfully employed. Even Rose’s life, however, holds hidden pratfalls. As the three sisters converge on their parents’ home — ostensibly to support their mother, who has been diagnosed with breast cancer, but really to lick their own wounds — they will have to find ways to communicate with and learn from one another. The process is at times extremely difficult, but as they continue to challenge one another, the women begin to realize just how much their sisters have to offer.

Inspired by Shakespeare — the sisters’ full names are Cordelia, Bianca and Rosalind, from King Lear, Taming of the Shrew and As You Like It, respectively — Brown’s prose is beautiful to the point of being poetic, while still being completely accessible to any reader. Those steeped in Shakespeare will recognize allusions to his plays throughout the book, but there is no need to read, like or understand the Bard to thoroughly enjoy Brown’s story and writing.

Potential readers should be aware that Brown does employ an unusual style of narration for The Weird Sisters. Instead of having one of the sisters narrate, or having a more impartial third person narrator, the story is told in the third person plural, by what is essentially an amalgamation of all three women’s voices. The narrator refers to itself and the sisters as “we,” while describing each individual woman’s story as if from an omniscient third-person point of view. Although it is infrequently used and may sound odd, Brown is incredibly successful with this tactic, which is similar to the narrator Jeffrey Eugenides used in The Virgin Suicides. There is a feeling that it is not so much the sisters narrating, but actually their sisterhood — that intangible and magical thing.

Whether you choose your books based on plot, writing or both, Brown’s moving, beautifully written novel of family and identity is sure to satisfy and is now available in paperback.

Must-read: Across the Universe by Beth Revis
February paperback picks
Must-read: The Woman Who Heard Color by Kelly Jones