Willow Smith took it all off — her hair, that is. Check out the pint-sized singer’s new short ‘do! 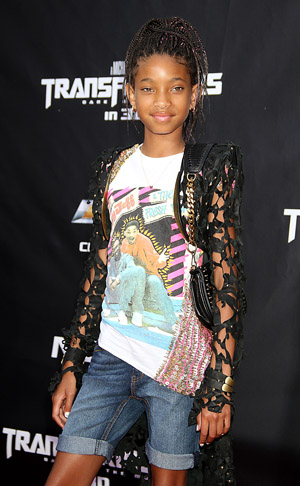 Today is the day the hair whipping died. Willow Smith, purveyor of all things hair-whipping, opted to shave off her strands and show it off on her WhoSay account.

The daughter of Will Smith and Jada Pinkett-Smith didn’t add any commentary to her photo, but it’s safe to say she’s willing to embrace different hairstyles when the time is right. That doesn’t mean we aren’t completely upset over her choice, especially because of the symbolism behind her song, “Whip My Hair.”

“‘Whip My Hair’ means don’t be afraid to be yourself and don’t let anybody tell you that that’s wrong. Because the best thing is you,” she said after the song’s release.

However, it sounds like she’s taking some style cues from her musical idol, Nicki Minaj.

“Nicki Minaj is absolutely an amazing person. She has so much energy, and working with her was like just [a] spark. We were coming together with all our art and everything and it was amazing,” Smith told Ryan Seacrest of her “Fireball” collaborator.

However, she’s still an individual.

“I would describe my style as schoolgirl meets punk rocker. […] I used to like dresses and tights but when I turned nine, my style changed,” she told Celebuzz of her style choices. “My mom helps me pick out my clothes, but my brother always says: ‘Willow, sag your pants!'”

Willow’s stylist — yes, a 12-year-old seriously has a stylist — said she models some of the singer’s clothes after another pop princess: Rihanna.

“Willow is definitely inspired by Rihanna’s style… Willow really knows what she likes and what she doesn’t like, and she’s vocal about it,” Mariel Haenn said last year. The influence, Haenn said, comes from her mother.

“Jada said upfront that she didn’t want us to dress them like standard kids, like with Sesame Street T-shirts. And the kids really like dressing as adults and hope that adults will want to dress like them. But Jada will put her foot down if there’s something she doesn’t like, though if the kids really love it, she’ll usually let it pass.”