Former Price is Right host Bob Barker is upset with his former show after they gave away a trip to the Calgary Stampede. Find out what the outspoken animal rights activist has to stay about it. 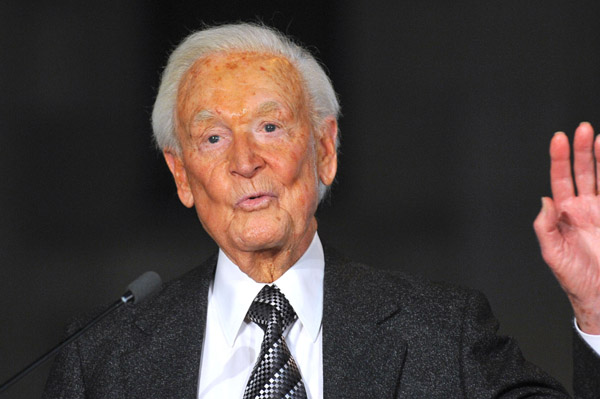 Bob Barker, the iconic former host of The Price is Right, is upset with his former place of employment. The outspoken animal rights activist is fuming after the show gave away a trip to the Calgary Stampede as part of a prize package.

Why is he so up in arms about the prize? The Calgary Stampede isn’t exactly known for its ethical treatment of animals, according to Barker.

“They injure animals on a regular basis and kill them occasionally,” he told Ecorazzi.com in an interview. “It’s a rodeo and you know rodeos are notorious for animal cruelty. They shock animals and mistreat animals, jab them with pitchforks and so on to make them buck or run and they break the necks of calves. Calf roping is probably the worst thing of all. And people go to see it. Some people.”

Barker is well known for his animal activism — he ended every episode of The Price is Right with “Help control the pet population. Have your pet spayed or neutered.”

Drew Carey promised to continue that tradition under his regime, but Barker doesn’t know if the new host has any control over the prizes.

“Incidentally, when I was there, I was the executive producer and host and everyone knew that I wanted animals protected and they would never have brought me a thing like this,” he told the website. “But, Drew, I don’t know what his position is. I know he’s host, but whether he could say, ‘Look, I don’t want to do this,’ or not, I don’t know. I do know that the first time I met him… the first thing he said to me was, ‘Bob, I will do the spay/neuter plug that you have started… as long as I’m the host of the show’ and I thanked him profusely and he’s done that, too.”

Barker also tried to expressed his disdain over another recent prize given on the show, but no one would return his calls.

“When I did the show, we did absolutely nothing that in any way would be harmful to animals. To have them do this is very disappointing to me,” he said. “I can’t understand what they’re thinking of because they’re going get all kinds of bad publicity out of this.”

As for the winner? He doesn’t blame her, he just wants her to drop the show from her Calgary itinerary.

“I would suggest that they go on and go up to Canada and have the room and board paid and enjoy Canada but stay away from that Calgary Stampede.”