Growing up an only child, Liv Tyler dreamed of having a twin sister. Could she have been missing half sister Mia Tyler without even knowing she existed? 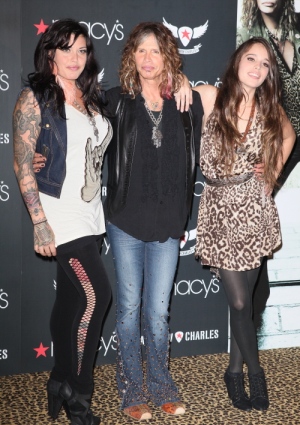 Until the age of 11, Liv Tyler had no idea her father was Aerosmith rocker Steven Tyler. The actress, now a mother herself, has opened up to Marie Claire about how her lonely childhood has influenced the way she parents son Milo.

Liv Tyler spent her early years being raised alternately by her mother Bebe Buell, grandmother and an aunt, unaware of who her father really was — or that she had a half-sister named Mia.

“I was by myself a lot [as a child], so I definitely talked to myself and made up my own games,” the actress told the magazine. “I used to wish I had a twin really badly. I so wanted a twin. That’s so strange. Then I met my twin.”

Though not technically her twin, of course, Mia Tyler (Steven Tyler’s daughter with first wife Cyrinda Foxe) and Liv Tyler are just 18-months apart in age.

“Maybe all the time I was missing Mia,” Liv pondered of her half sister. “But then I met Mia when I was 11 and she looks exactly like me. That is really weird.”

Steven Tyler went on to have a third daughter, Chelsea Anna Tallarico, and a son with second wife Teresa Barrick. Mia and Chelsea are pictured here with their father in 2011.

Why Steven Tyler changed his mind about monogamy >>

Liv Tyler, now the 34-year-old mother of son Milo with ex-husband Royston Langdon, said of her unconventional upbringing, “It’s brought up a tremendous amount of issues, concerns and worries for me, being a mother and how much that meant to me based on my childhood and what I went through. Wonderful, beautiful things and difficult things.”

“It was always a dream of mine to be a mother. I didn’t really ever dream of being an actress. I always dreamed of being a mother ever since I was a young girl.”