Ellen DeGeneres is getting the support of JCPenney and shoppers around the country after a Christian group called for a boycott. 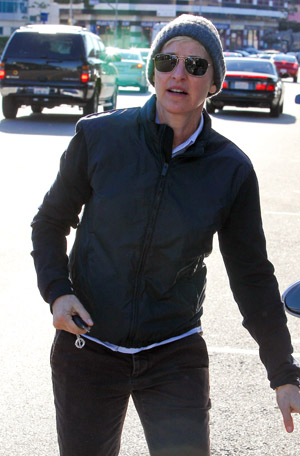 America might be ready to boycott the Kardashians, but don’t try to desecrate the name of Ellen DeGeneres! The retailer is standing behind the beloved talk show host after a conservative group called for her ouster as spokeswoman.

“We share the same fundamental values as Ellen,” JCPenney president Michael Francis said earlier this week. “We couldn’t think of a better partner to help us put the fun back into the retail experience.”

One Million Moms (OMM) called for the boycott earlier this week via the group’s website.

“Funny that JCPenney thinks hiring an open homosexual spokesperson will help their business when most of their customers are traditional families,” they wrote. “More sales will be lost than gained unless they replace their spokesperson quickly. Unless JCPenney decides to be neutral in the culture war then their brand transformation will be unsuccessful.”

Not so fast. Ellen supporters have flocked to the retailer’s page to voice their approval and thank JCP for promoting diversity.

“Congrats on choosing Ellen to represent you. As a lesbian mom, I think there’s many millions of moms who would rather have a store that show acceptance and kindness, rather than intolerance and judgment. I’ll be shopping at jcp more often. Thanks,” one customer wrote.

Others spoke of their intention to start shopping at the department store again.

“Your selection of Ellen may actually get me back in your store. Congrats on choosing diversity over devisive [sic] hate. Million moms can go re-read bibles,” another wrote.

“I too am a Christian and believe in marriage. So much so that I tried 3 times before I found the right partner. Yes, I am a woman with a man for a husband; however that was my choice — not because it is ‘right,'” JP wrote. “I believe a person’s partner is their own choice — not decided by anyone or anything else. As far as Penney’s, I have shopped there in the past and will continue to do so. By the way, I love Ellen!!”

The funny thing: One Million Moms was started by a man and doesn’t have anywhere close to one million members. That hasn’t stopped the group from pushing their boycott in another direction: Toward Macy’s. The group wants supporters to stop shopping at the store for featuring a same-sex marriage wedding cake decoration in a catalog ad.”

“In the hopes of making sales, your company has instead offended many customers in the process. The back cover looks like just a regular ad for your wedding registry service, but there is one major difference with the cake topper of two men instead of the traditional man and woman,” OMM wrote.

“The ad also includes a license plate that reads ‘I do’ and hearts scattered everywhere. Just because gay marriage is legal in a few states does not mean this is appropriate marketing. As a conservative customer I will not support it.”

Just like people aren’t supporting your cause, right OMM?