After being dissed by government officials in the Garden State, Jersey Shore‘s Snooki and JWoww could find their buzzed-about reality spinoff relegated to the backwoods of Pennsylvania. 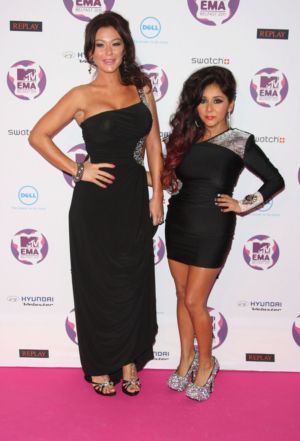 Pennsylvania can hardly wait to get its hot little hands on reality personalities Nicole “Snooki” Polizzi and Jenni “JWoww” Farley.

Hoboken Mayor Dawn Zimmer says the Film Commission opted not to issue a permit for the new reality show due to “safety and quality of life concerns.”

Last month, The Jersey Journal newspaper reported that MTV was scouting Hoboken locations for Snooki and JWoww to complete filming. Shore producers, 495 Productions, had been seeking a 24-hour filming permit to follow two “well-known reality television celebrities” who would live in the city.

The production company can appeal the decision to the Hoboken City Council.

In the meantime, if Snooki and JWoww ever need a place to stay, another Jersey Shore will welcome them with open arms.

Yep, Jersey Shore, Pennsylvania, a tiny borough in the north-central area of the state.

The Central Pennsylvania Film Office is encouraging the foul-mouthed reality stars to swing by their Shore, as well as the nearby town of Williamsport, for a visit. Local tourism officials are certain JWoww and her pint-sized comrade will find both locations ideal for shooting their still-untitled companion series.

After all, the commonwealth was once home to TLC’s Jon and Kate Gosselin.

The series will feature the self-professed “guidettes” doing what they do best — wreaking havoc on an unsuspecting sleepy community to the merriment of reality fanatics.

You know, the usual.

Snooks and JWoww have already begun filming scenes for a pilot in Farley’s hometown of Long Island, New York.

So far, there’s been no word from the stars or Shore producers on whether or not they’d consider hitting the road and setting up shop in central Pennsylvania. Previous seasons of Jersey Shore have been filmed in Seaside Heights, New Jersey, Miami, Florida and Florence, Italy.

The Shore spinoff is expected to premiere on MTV later this year.

57 mins ago
by Daisy Maldonado