Simon Cowell is a man who knows what he wants. And when it comes to The X Factor USA, what Cowell wants is Beyoncé. 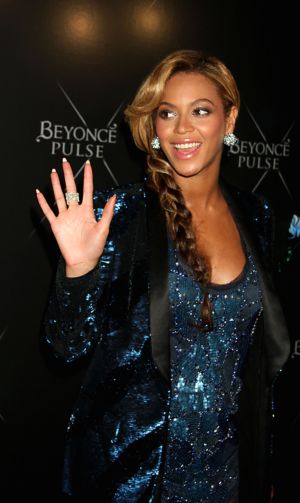 Listen up, X Factor fans. Here’s the latest scoop heating up the search engines: Simon Cowell has reportedly offered pop megastar Beyoncé a whopping $500 million to appear as a judge and mentor on the sophomore season of his struggling FOX talent show, The X Factor.

An “extremely reliable” (but unidentified) source blabbed the alleged scoop to Media TakeOut on Thursday. We hear Simon is desperate to get a “big name female star on the panel” and Mariah Carey — who has been the subject of X Factor rumors since the show’s inception — just won’t cut it.

“[Mariah]’s not that hot today,” snipped the snitch. “[Simon] wants Beyoncé because that would immediately give him the bounce needed to beat American Idol.”

Beyoncé, who hasn’t been seen publicly since giving birth to daughter Blue Ivy last month, has been presented with a five-year deal worth a reported $100 million per year, according to the report.

Media TakeOut insists their source is the same person who accurately revealed Jennifer Lopez was in talks to become an Idol judge. Separate sources have since told E! Online that the rumors are “unlikely to be true” since the half billion dollar is “especially crazy.”

Steve Jones, Nicole Scherzinger out on The X Factor >>

When host Steve Jones and judges Paula Abdul and Nicole Scherzinger were fired from their duties on the American version of The X Factor this week, speculation immediately began about who would be taking over the coveted spots. Nicki Minaj, Katy Perry and Kelly Rowland were tossed around as potential replacements.

But it was Mariah’s name that had gossip gawkers going gaga.

Will Carey take her place at the judge’s table when The X Factor returns to the tube in September? Don’t hold your breath, says Nick Cannon. The America’s Got Talent host believes his bride is “too legendary” to resort to lowly employment like working for a talent show.

Just a sec, Nick. Don’t you work for a talent show?

“Like Nicole Scherzinger, my wife is not a fan of judging people. Nicole actually did say that she is used to performing and the judging thing is not really natural for her,” he told Entertainment Weekly on Wednesday.

Will Mariah Carey step into judge’s seat on The X Factor? >>

“I really think that a lot of entertainers feel that way and I think these shows are really good shows, but when you get someone of status, or just big-time, career-wise, to do these shows, I personally think it’s a step down,” the TV personality explained.

Nick added, “Why would my wife want to be on a show like that? For somebody who has a legendary career, I don’t know why they would do that.”

Meanwhile, Abdul is livid over her axing… and the whispers about who might be stepping into her shoes.

“Paula heard they want to replace her and Nicole with Mariah and Beyoncé,” a tattle told The Daily Mail this week. “She didn’t see any difference between her and them — unless you consider the fact they are both a lot younger and they both just became new moms.”

The snoop said, “Paula will be really upset if one of those women ends up filing her chair, because neither woman has ever been on a panel and she doesn’t know what makes Simon, or anyone else, think someone inexperienced like that will help boost ratings.”

To be fair, Beyoncé isn’t a complete novice on the talent show pundit front. The ’90s girl bander served as a guest judge on the Australian version of The X Factor last year.