A German model once romantically linked to singer Seal says rumors about the Brit’s short temper and anger management issues are more than just filler for the pages of glossies. 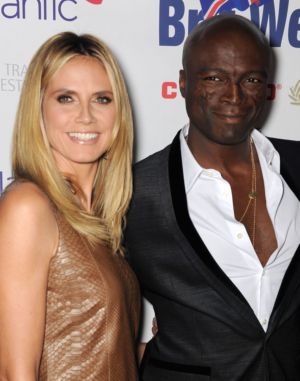 The rumor mill is working overtime in the wake of the marital bust-up between Seal and Heidi Klum.

And if our calculations are correct, its high time exes started coming out of the woodwork with decades-old stories to further stir the pot.

(Grab some popcorn and pull up a chair.)

Last month, crooner Seal and his wife Heidi, frontwoman for the Lifetime design competition Project Runway, announced they were separating “with honor and dignity” after nearly seven years of marriage.

Reports suggest Heidi dumped her husband because of his nasty temper. Seal denied the breakup was due to his allegedly short fuse.

Of course, his former flame spins quite a different tale.

German model Tatjana Patitz (Seal’s really got a thing for German models!) dated the “Kiss From a Rose” singer between 1997 and 2003. She’s remained mum on her romance with Seal in the years since his 2005 nups to Klum, but now Patitz is stepping forward with a public appeal to Heidi: Run for the hills, girl!

“He is not a nice person. He has anger issues. He is definitely not someone who I think of fondly now,” Tatjana confessed in an interview with the new edition of In Touch Weekly.

Heidi Klum breaks her silence on her divorce >>

And she goes on to tell the mag she believes a divorce would be the best possible option for Heidi, “because there are children involved.”

Meanwhile, cringeworthy quotes have been released from an interview Heidi gave a month before her split. In the chat, which ran on the pages of InStyle UK this week, she gushed about how much she loved her soon-to-be ex-husband.

“I don’t know why we work, my husband and I. We just do,” the catwalker smiled. “We are black and white — yin and yang.”

Heidi continued, “To me, his beautiful face, great body, amazing heart, voice, his ability to be a loving, caring person and father… What can I say?”

“I have a lot of fun with him,” she added. “He’s off the cuff. He’s not fixed in his ways. And he knows how to handle me. It’s always been really passionate between us.”