We’ve said it before and we’ll say it again: Dinner parties in Mystic Falls never end well. Keep reading to see what went down at Klaus’ strange dinner party on The Vampire Diaries. 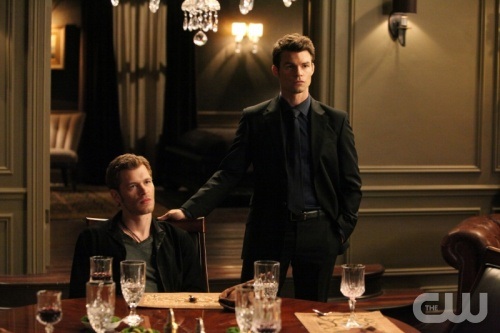 Elijah’s return, Stefan trying cozy up to Bonnie and Abby — there’s never a dull moment on The Vampire Diaries.

This week’s episode of The Vampire Diaries, “Bringing Out The Dead,” was so delicious we’re just going to get right to the point!

Damon thought it would be a riot if he and Stefan bought Bonnie and Abby some time to open the fourth coffin that was stashed in the cave. The bright idea was to call a “mock truce” of sorts during a dinner party hosted by Klaus and Elijah.

Stefan and Damon offered the coffin for Elena’s future safety and the Original’s word to leave Mystic Falls. Well, Klaus had his own counter offer: Elena had to marry a human, not a Salvatore, and he was to keep a lock on her blood for his future hybrid needs.

Nope, wrong answer. Stefan went to shake Klaus’ hand but basically spat in his face. Ugh, not the right move. Klaus dangled Stefan’s hand over the fireplace, promising to burn Stefan if Damon didn’t get his coffin — now! Elijah was tasked at going with Damon.

First, while the dinner party was going on, Abby and Bonnie made progress with opening the coffin — despite some heated moments brought on by Bonnie’s anger toward her mother.

The hottest vampire in Hollywood >>

When Bonnie stepped out to text Damon that they needed him to stall a little longer, Abby noticed that whatever was in the coffin was fighting its way out.

Second, moments after leaving the dinner party to go get the coffin, Elijah returned with a few friends: Rebekah, Cole and Finn, the rest of the Original siblings!

They dismissed the Salvatore brothers, then took turns stabbing Klaus.

Ready for this one? Damon and Stefan arrived at the caves where the coffin was being held to find Bonnie and Abby out cold and the coffin open.

Back at Klaus’ place, the rest of the Originals vowed to leave Klaus alone after they’ve killed Elena. A new force enters the room: Esther the Original mama witch. She’s there to forgive Klaus and take her family back!

Oh, this is going to be good!

Bill Forbes was found with his throat cut and vampire blood in his system, so he opted to take the hard way out and die rather than feed.

Alaric was also stabbed at Elena’s, but survived thanks to his ring.

Basically, someone is using weapons from Elena’s family stash to pick people off! Who could it be? It was discovered it couldn’t have been Meredith because she was in surgery during Alaric’s stabbing!

Sound off now: Who’s to blame for the weird killings?