American Idol hit its last stop on the audition train Thursday night (St. Louis), so that means we finally get what we’ve been waiting for — Hollywood week. Well, we have to wait until next week, but you get the point. 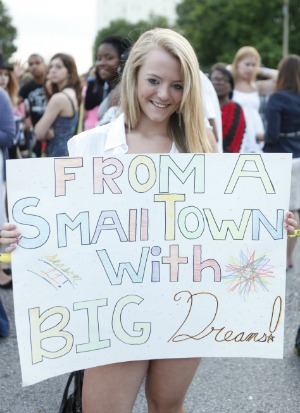 There’s a lot to talk about, so let’s get right down to American Idol business! Not only did Idol hit its last audition stop in St. Louis, where we were treated to a few stellar singers, the show also gave us a first look at a huge music video premiere: Madonna’s “Give Me All Your Luvin.”

By these names, yes: Johnny Keyser, whose stirring rendition of “A Change Is Gonna Come” left us with chills, and the sassy Rachelle Lamb took a risk with Faith Hill.

Bullying is a rising epidemic and no one understands it more than Idol contestant Reis Kloeckener. Reis learned to channel his pain through choir and listening to his rendition of “Lean On Me” was all the proof that we needed to know he’s going to be just fine.

Ethan Jones, despite having his fair share of family issues with a dad who underwent treatment for alcohol/drug addiction, struck a chord with “I’ll Be.” Maybe it’s the smell of Valentine’s Day in the air, but this guy made us swoon.

Nothing compared to Lauren Gray, however, who took on the big voice of Adele. Two seconds into the audition all three judges literally said, “wow.” She was fearless!

Okay, enough of the auditions, let’s dish about the first look at Madonna’s video for “Give Me All Your Luvin,” featuring and co-written by Nicki Minaj and M.I.A. It was fun, poppy and interesting — something we’ve come to expect from Madonna, but here’s the best part — it was updated!

Incorporating the current funky feel of Nicki Minaj gave the iconic star an added edge for today’s younger crowd who need their attention span stimulated. We loved the addition of cheerleaders to chant along and the football theme. The song itself isn’t bad, either — it’s catchy enough to make us want to download it. Kudos Madonna, Nicki Minaj and M.I.A. on a job well done!

With that said, Hollywood week begins next week and we’ll be the first to say it’s our favorite part of the show. Hopefuls either fall to the pressure or rise to the occasion in the most dramatic of ways — all for our viewing pleasure!

Did Jim Carrey’s daughter get special treatment on American Idol? >>

We’ve got our eye on a few singers during the pressure-filled week like Phillip Phillips and Britnee Kellogg. Phillip Phillips has been on our mind since his Savannah audition and we’re not sure we’ll ever stop thinking about his Stevie Wonder-esque audition. Britnee Kellogg on the hand, gave a crazy-good audition of “You’re No Good” in Portland, but it was her bond over motherhood with JLo that brought a tear to our eyes, making her one to watch.

We could go on and on, talking about more talented stars like Jessica Phillips (no relation to Phillip) or Kristine Osorio (Galveston), but we’ll save it for next week when the Hollywood auditions begin Wednesday, Feb. 8!

Tell us: Who do you have your eye on during American Idol Hollywood week?