Roseanne Barr has filed the formal paperwork necessary to run for president in 2012. Will you vote for her? Read on to learn her political platform. 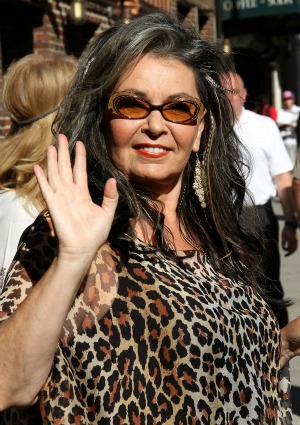 She threatened that she was going to do this last summer, and the time has finally come for her to put her money where her mouth is. Roseanne Barr is running for president!

The actress confirmed that she filed paperwork to run for president as a Green Party candidate, tweeting, “I am running for Green Party nominee for POTUS. I am an official candidate. I am4 the Greening of America&the world. Green=peace/justice”

“crying now, knowing that as a girl I dreamed of running for POTUS, and I am now actualizing that desire. BEHOLD THE GREENING OF AMERICAN POL”

“I am pro the Middle and Working Classes, who are being strangled 2 death by dem&repub. Green Party is 4 small business&social safety net… as POTUS I will forgive all student loans and ALL HOMEOWNER DEBT AND ALL CREDIT CARD DEBT. As potus, I will pursue all lawbreakers-financial terrorists first.”

“If ppl will merely do as I tell them to do just this one time, I promise everything will get a lot better quickly4 the majority. #nutn2lose.”

Roseanne Barr for president? You better believe it! >>

Scott McLarty, the national coordinator for the Green Party, confirmed to E! News that Barr is running.

“Our standpoint is that Roseanne is running for the nomination, and we are impartial to all our candidates officially,” he said.

“We welcome Roseanne Barr into the race, and she will make it very interesting from what I have seen. Ms. Barr wants to say some very serious things in her campaign, and from what I can tell, she is motivated by her own experiences and her desire to see the United States become a much better country.”

While the Green Party has been running candidates for public office since 1985, no member currently serves at any state or local level.

Tell us: Would you vote for Roseanne Barr for president?