Reporters just won’t stop asking Madonna about lady Gaga. Luckily, Madonna is all-too-willing to talk about her disdain for the “Born This Way” singer with veiled insults. 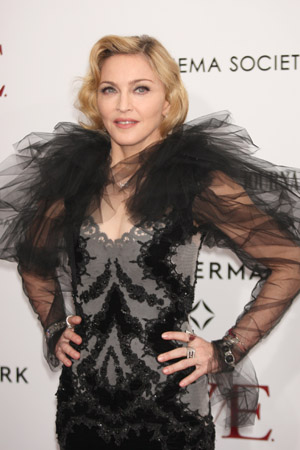 Madonna is really, really bitter about Lady Gaga — and reporters are all too willing to fan the flames with their questions. The Super Bowl halftime show star talked Gaga in the latest issue of The Advocate and basically said the Mother Monster is good, but she’s no Britney Spears.

“It seems genuine,” Madonna told the magazine about her love for gay men. “It seems natural, and I can see why she has a young gay following. I can see that they connect to her kind of not fitting into the conventional norm. I mean, she’s not Britney Spears. She’s not built like a brick sh**house.”

We’re assuming she means that Gaga isn’t what people view as conventionally attractive — then again, neither is Madonna.

“She seems to have had a challenging upbringing,” Madge continued. “And so I can see where she would also have that kind of connection, a symbiotic relationship with gay men.”

However, it’s what she didn’t say that was the most telling. The interviewer asked her what she really thinks about the “Marry the Night” singer — and she gave a non-answer.

“I have no thoughts. What’s the question?” she replied.

This is hardly the first time Madonna has spoken out about her heir apparent. The mother of Lola told Newsweek in January that she hears the similarities between “Born This Way” and her song, “Express Yourself.”

“I thought, this is a wonderful way to redo my song,” she told the magazine. “I mean, I recognized the chord changes. I thought it was… interesting.”

This came after Lady Gaga insisted that Madonna gave her blessing to the song. Madonna, on the other hand, questioned Gaga’s ethics in an interview with French magazine Le Soir.

“As for Lady Gaga, I have no comment to make about her obsessions having to do with me because I don’t know whether her behavior is rooted in something deep and meaningful, or superficial,” she said.

Gaga, you know you’ve made it when Madonna feels threatened by your career!