U2 lead singer Bono is about to get a big payday thanks to Facebook. Find out why he’s getting a ton of cash from the powerful social network. 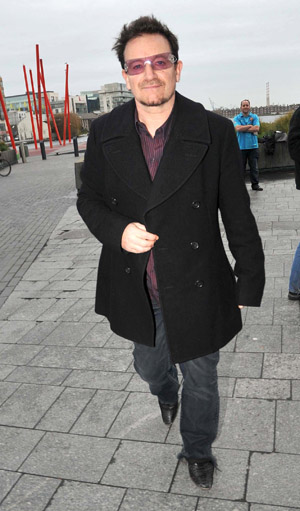 We were all stunned to find out that Facebook founder Mark Zuckerberg is about to earn $12 billion when the enormous social network goes public. However, one big-time investor in the social network will make a pretty penny, too: Bono.

Yes, U2 front man and social activist Bono will also earn upwards of a billion for his fractional investment in the company. Bono’s investment company, Elevation Partners, owns 1.5 percent of the company, equaling about $750 million in shares, according to Fortune.

We’re really surprised that we’d never heard about Bono’s involvement with Zuck and the crew before now. The Irish singer is very vocal about his involvement in poverty-stricken Africa, so maybe he didn’t want to show how rich he really is.

“Our generation will be remembered for the internet, for the war against terror and for how we let an entire continent burst into flames while we stood around with watering cans — or not,” he told Oprah in a 2004 interview. He was inspired to help the African people after visiting the country with his friend, Bob Geldof.

“A man walked up to me, gave me a child, and said, ‘You take my son. He’ll live if you take him,'” he remembered of his first visit. “And I couldn’t take the boy. But that really formed my commitment. I remember coming home on the plane saying, ‘We’ll never forget this.'”